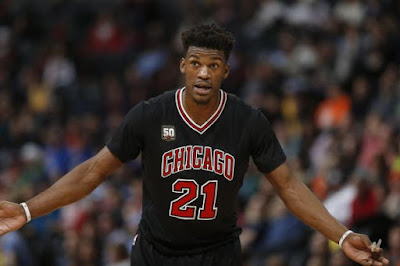 The Celtics and Timberwolves both have their eyes set on Bulls All-star guard Jimmy Butler.

The Timberwolves are prepared to offer Chicago a packaged deal that would include the No. 5 pick in this year's draft in exchange for Butler, according to ESPN.

Minnesota has recently hired former Bulls coach Tom Thibodeau and are willing to deal some of their best players along with the pick to acquire the All-star guard. Sources say, although the Bulls are intrigued by the thought of potentially drafting Providence guard Kris Dunn -- who is projected to be a top-five pick in next week's draft, they aren't actively looking to deal Butler but have been listening to offers.

In February, the Celtics reportedly offered the Bulls two first-round picks and roster players but talks supposedly ended when Chicago asked for Jae Crowder. The Celtics are reportedly also interested in acquiring Butler, and with a higher pick than Minnesota (No. 3) along with quality players, they could offer the Bulls a better deal than the Timberwolves.

The Timberwolves' No. 5 first-round pick, Andrew Wiggins, Nikola Pekovic and Zach Lavine is probably the best packaged deal that Minnesota can offer Chicago without including their franchise player, Karl Anthony-Towns.

Meanwhile, the Celtics have an impact player of their own -- Avery Bradley -- who's one of the league's best perimeter defenders. However, the Bulls would still be giving up Butler, the best player in the trade -- so why would they do it?

In my opinion, the Bulls have to start rebuilding their roster. Derrick Rose, whose name is being tossed around in trade rumors as someone Chicago is trying to deal, isn't the perennial All-star he used to be -- due to his health -- he hasn't played a full season in five years. Pau Gasol, who's turning 36 next month, is going to test free agency -- where there's a good chance he'll join a championship contending team like the Spurs in hopes of winning another ring at the twilight of his career. And then there's Joakim Noah -- he's made it clear that he's very disappointed with his playing time last season with the Bulls and wants out via free agency.

The Celtics' No. 3 & No. 16 first-round picks, Avery Bradley, Marcus Smart and Jonas Jerebko is a great way to start their rebuild.

The Bulls would not only get one of the best back court defenders/15-point scorer in Avery Bradley, they would also get his understudy in Marcus Smart -- who defensively, isn't very far behind Bradley.

Pairing Butler with Isaiah Thomas instantly improves the Celtics' back court and puts them in a great position to attract a top-tier free agent. This is a great opportunity for Danny Ainge to trade for a franchise-changing player, a deal he has to get done, even if it means giving up his best assets.