Celtics Summer Madness - Vote in the "Thank you, Brooklyn" Bracket! 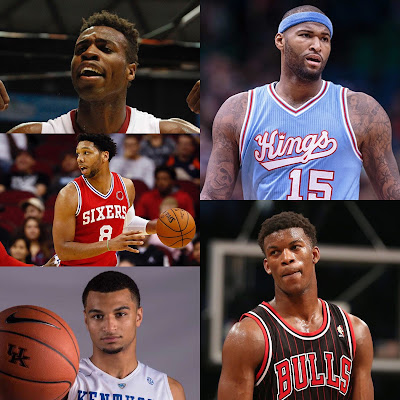 We want hear from our loyal readers and die hard fans of the Boston Celtics on what YOU think the Celtics should do this off season. Every Celtics fan out there has a passionate opinion on what the best course of action is for the Celtics to improve this off season. Here at Causeway Street we want you to be heard, so it's time for you to vote!

We will be having two Brackets. The first bracket will be what we are calling the  "Thank you, Brooklyn" Bracket. In this bracket it's all about the number 3 overall pick that the Celtics posses, thanks to the Nets. What is the best return Danny Ainge can get with it? Does he use it in a trade to get one of the established veterans that have been rumored? Or should he draft the third best player in the draft and build around him for the future?

Scroll down and VOTE! We will announce the winner of the first round on Monday [6/13] at 8 PM, so you have a few days to get your votes in. Over the next week we will crown champion of the "Thank you, Brooklyn Bracket." Next week, stay tuned to vote for what Danny should do in free agency.

Without any further ado, Causeway Street Blog presents the..

In this matchup, we have the most talked about trade target in Bulls guard Jimmy Butler up against the guy that lit up the NCAA tournament last year in Buddy Hield.

In this 2 vs 7 matchup, it's a battle of some of the University of Kentucky's finest. Should Danny Ainge use the number 3 pick as part of the package it would take to get Demarcus Cousins from the Kings, or should he draft Jamal Murray and build through the draft?


Here we have the 3-time All Star Kevin Love up against a 19 year old Croatian Phenom Dragan Bender. Would you rather see the Celtics go out and trade for the much maligned superstar in Kevin Love, or use the number 3 pick to see if they can get their own Kristaps Porzingis in Dragan Bender.


The battle of the Philly big men. Both have been rumored in trade talks with the Celtics. If they both have the same asking price, who would you rather have the Celtics go out and trade the number 3 pick for?