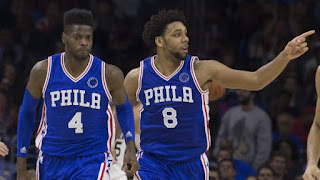 Trade talks surrounding the Celtics and their coveted No. 3 pick are heating up.

With the NBA Draft only two days away, the Philadelphia 76ers are pushing to make a deal with the Celtics in exchange for their power forward -- Jahlil Okafor, according to basketball analyst and former Providence coach Tim Welsh.


"Philly has told Kris Dunn's camp and his agent they are trying to push the buttons to have this happen before the day," Welsh reported on CSNNE's Sports Tonight. "They've been in Providence locked in to the city talking to everyone that's ever encountered Kris Dunn. They are putting the full court press on the Celtics to acquire the third pick. It could go down in the next two days, so we'll see. Boston has the upper hand in knowing what Philly wants."

For a young team in need of a starting point guard, Providence's Kris Dunn is considered to be the best point guard in this year's draft and would undoubtedly be drafted by Philadelphia at No. 3 if this deal were to happen.

However, Welsh added that the Celtics would prefer to acquire center Nerlens Noel from the 76ers instead of Okafor. So it appears that the 76ers may not be willing to deal Noel to the Celtics but would love to complete a deal including Okafor sooner rather than later.

Okafor, who averaged 17.5 points and 7 rebounds in his rookie season last year, would give the Celtics a low post-scorer. He would certainly be an upgrade from Jared Sullinger in the starting lineup and provide the Celtics with a consistent scoring big man.

But ideally, Noel's defense, athleticism and ability to finish around the basket may fit Celtics coach Brad Stevens' system better than Okafor would. He would give the Celtics a bright young rim protector who can run the floor better than Okafor in fast-break opportunites. However, Okafor has three more years left on his contract, whereas Noel only has one and could demand a max-deal next summer.

But the Celtics will be weighing their options.

According to ProBasketballDraft.com, the Celtics have had discussions with the Milwaukee Bucks about packaging their No. 3 pick along with another player in exchange for Bucks guard Khris Middleton.


A bit of #NBADraft chatter: Boston has discussed 3 and a contract for Khris Middleton. Danny Ainge wants to add a scorer. #Celtics
— Probasketballdraft (@Probballdraft) June 21, 2016


Middleton, who is coming off his best season averaging 18.2 points, 4.2 assists, and 3.8 rebounds, inked a $70 million contract extension last summer with Bucks. He may not be the budding superstar that Celtics fans are waiting for but would fit in nicely. He's a versatile scorer, a good defender and would boost the Celtics' roster, depending on who that "contract" is.

While it's a good sign that the 76ers are eager to move one of their best players for the Celtics' No. 3 pick, Celtics president of basketball operations Danny Ainge is still holding out on something better. Ainge is very meticulous like that. He'll continue to gauge the trade market from now until Thursday, before he calls the 76ers and makes a deal for either Okafor or Noel.