The Hunted: How will Celtics respond to being favorites? 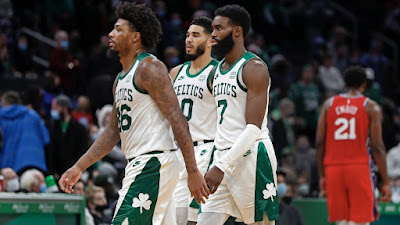 The Celtics enter this upcoming season in much different territory than they were a year ago. Two wins away from winning their 18th championship, Boston enters the 2022-23 campaign hungry to get over the hump with much different expectations.
Entering last year's training camp not much was expected from the Celtics with teams like the Brooklyn Nets, Milwaukee Bucks, and Miami Heat -- all teams Boston defeated on their way to this past June's NBA Finals -- were all heavily favored to come out of the Eastern Conference.
Considering their Finals run last season, coupled with their offseason acquisitions Boston enters the 2022-23 season with high expectations as one of the favorites to win the title this year. The Celtics have seen this story before being one of the top teams in the East after falling short in Kyrie Irving's last season with the team in 2018-19, which was considered to be one of the league's deepest teams at the time.
Still, fast forward to the present day and Boston is once again in the conversation for having one of the deepest rosters. Hoping to avenge their difficult Finals loss to the Golden State Warriors, how will the Celtics respond this season? With both Irving and Kevin Durant returning to the Nets, the Bucks returning to full health, the Philadelphia 76ers improving their roster, and the Heat getting healthier, Boston's road back to the Finals won't be an easy one.
Now viewed as the team to beat and the reigning East champs, will the Celtics crack under the pressure of high expectations, or embrace the challenge and complete their ultimate goal?
This offseason Boston did something that is difficult for many competing teams -- improving the roster without having to get rid of significant talent. They did just that with their first move of the off-season acquiring Malcolm Brogdon without having to trade any core rotational players.
Boston desperately needed more scoring off their bench with Derrick White being the team's best option offensively. The rest of the second unit was sporadic, not producing at a consistent level which put more pressure on Jayson Tatum and Jaylen Brown to carry the offense, especially against the Warriors in the Finals.
Adding Brogdon not only added some scoring to the roster, but it gave them another veteran that can run the offense without hurting their defense. Averaging 19 points per game last season in limited action with the Pacers, Brogdon can easily become the Celtics' third option offensively even as a sixth-man.
We saw how stagnant the Celtics' offense became when Brown and Tatum's shots weren't falling. Now with Brogdon, the team has another reliable option to score -- forcing the Celtics' two stars to play more off-ball. Boston's success last season revolved around their defense so adding another solid defender to the team that can produce offensively only helps them.
With Al Horford's return, Boston's young core will receive some veteran leadership which is crucial for any team trying to make a deep playoff run. Robert Williams should be much healthier this season and will continue to grow as a defender, rebounder, and elite shot blocker. With those two players holding up the front court, the Celtics should be in good shape to slow down some of the premier big men in the league.
Although he's not the same player he once was, Danilo Gallinari can still provide the Celtics with an offensive spark off the bench. It remains to be seen how he'll perform when he returns from injury after suffering a torn left meniscus last Saturday. He averaged nearly 12 points per game and shot 38% from 3-point land last season with the Atlanta Hawks, which Boston could certainly use. Defensively he'll be a liability, but the Celtics still value his scoring ability.
There will be a lot more competition this season, and Boston will have to be ready for it. It's very easy to get caught up in expectations, but the Celtics will need to have somewhat of a similar mindset as the second half of last season -- ignore the noise, stick together, and defy the odds.
Most teams in the Eastern Conference have improved their rosters over the summer and the Celtics will have to be prepared for healthier teams. James Harden and Joel Embiid are still two of the best players in the league and will be a force this season for Philly. Giannis Antetokounmpo still remains dominant and with Kris Middleton returning it'll be hard to count out that All-Star duo in Milwaukee. Then there's the Nets. Aside from all of the rumors of Irving and Durant leaving, they're still going to be a threat with Ben Simmons in the mix.
All of these teams will be standing in the Celtics' way of competing for a championship, and Boston can't be complacent. Ime Udoka has proven he holds his players accountable and will place more emphasis on staying disciplined, especially after getting a taste of playing basketball in June.
It's not easy to make it to back-to-back Finals, but with their current roster it's certainly possible. Boston has the depth to make it happen, they just have to stay healthy. Banner 18 is up for grabs, and it'll be up to this Celtics core to add to the franchise's legacy.
Ian Carrano
Follow @IC_Sports1