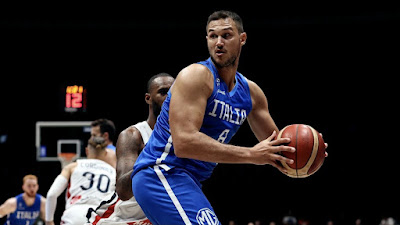 Celtics forward Danilo Gallinari has reportedly suffered a torn left meniscus playing for the Italian National Team, according to The Athletic's Shams Charania.
Gallinari, who confirmed the diagnosis via Twitter this morning following an MRI, sustained the knee injury Saturday night during the fourth quarter of Italy's FIBA World Cup qualifier against Georgia.


Danilo Gallinari has suffered a meniscus tear in his left knee, the Italian national team announces. No ACL or ligament damage, the team says, which is best case for the Celtics forward following the non-contact injury on Saturday. https://t.co/NG8mS7O6pB


Initially Italy's head coach Gianmarco Pozzecco feared the injury was a torn left ACL after Gallinari's knee (surgically repaired) buckled while driving to the basket, but Sunday's MRI ruled that out when it revealed that there was no ligament damage. The veteran forward previously suffered a torn ACL in the same left knee just before the 2012-13 NBA playoffs while playing for the Denver Nuggets, which forced him to miss the entire 2013-14 season.

"I hope and I pray that nothing bad will come out. It was... it is an honor coaching him. I saw pain in his eyes," Pozzecco said following Italy's 91-84 win over Georgia.

Besides being sidelined for the rest of EuroBasket, Gallinari's return with the Celtics remains unknown, as he could miss significant time to start the 2022-23 campaign.
At age 34, Gallinari signed with Boston on a two-year, $13.3 million deal in July, using the team's full Taxpayer Mid-Level Exception, with the 2023-24 season being a player option.
With training camp set to begin within the next month, the Celtics likely will get an update at a later date on the severity of Gallinari's meniscus tear and an approximate timeline of his rehabilitation.
Joel Pavón
Follow @Joe1_CSP