Celtics announce the signing of Matt Ryan to Two-Way contract 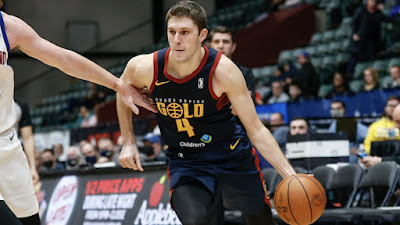 The Celtics have signed forward Matt Ryan to a Two-Way contract, the team announced on Monday and terms of the deal were not disclosed.
At 6-foot-7, Ryan has averaged 18.6 points, 3.6 rebounds and 2.3 assists in 16 games for the Grand Rapid Gold of the G League this season, while also shooting 38.7% from deep. The 24-year old played his college ball at Notre Dame and Vanderbilt before finishing his collegiate career with Tennessee-Chattanooga. He went undrafted in 2020 NBA Draft and has been in the developmental league since.
Ryan played two games for Team USA in the recent FIBA World Cup Qualifier last week, as the roster's second best scorer -- averaging 13.5 points while hitting 9-of-18 from 3 in 18 minutes per contest.
The Celtics had a two-way slot after giving Sam Hauser a standard deal following the trade deadline last month where five-roster spots opened up -- after bringing back Derrick White, Daniel Theis and shipping out Dennis Schröder, Josh Richardson, Romeo Langford, Bol Bol and PJ Dozier in three separate trades.
With Ryan signed, the Celtics now have one standard roster spot still open. Last week they signed two 10-day contract free agents in Kelan Martin and Malik Fitts to make sure they were at the required 14 players.
Joel Pavón
Follow @Joe1_CSP