Stephen A. Smith says Celtics are the team to beat in the East 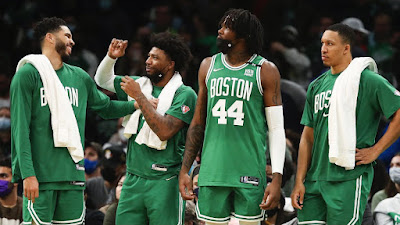 ESPN's Stephen A. Smith is now among the growing believers that Celtics can come out of the Eastern Conference.
The longtime NBA analyst stated his case on Tuesday's edition of First Take for the C's being the team to beat in the East, while former league veteran J.J. Reddick disputes that the reigning champion Milwaukee Bucks still rule the conference.

"[Ime] Udoka, what he has done, you can't say enough," Smith said. "This guy is a legitimate top-two Coach of the Year candidate."

Smith has been very adamant of the Celtics defense as of late, especially since the turn of the new year and he says it mainly has to do with starting lineup.

"They are like a bunch of piranhas," Smith said. "They switch everywhere, you have five guys, they get out on shooters better than anybody that I have seen."

While other teams outside of the Bucks were brought up like that Miami Heat, Smith noted that of course Giannis Antetokounmpo will get his usual numbers, but Robert Williams can match up well with Bam Adebayo and the addition of Derrick White has also been a positive on the defensive end.

"In the meantime while all of that has transpired, Jayson Tatum and Jaylen Brown have elevated their level of play," Smith said. "So I want to see it be more consistent, please don't get me wrong, because you weren't that way at the beginning of the season, you are flowing well over the last 30-plus games, I get all of that, the playoffs are a different beast.
"But when it comes to the playoffs, you've got to remember the game slows down a little bit. You don’t get as many open-court opportunities, team's defenses are able to get back … we know this about playoff basketball. And nobody wants Boston to do that because if Boston does that, that makes that defense even more formidable."

The Celtics at 45-28 (fourth seed) are coming off a 4-0 sweep on the road out west and have nine games remaining before the playoffs begin next month, it should be an interesting few weeks.
Joel Pavón
Follow @Joe1_CSP