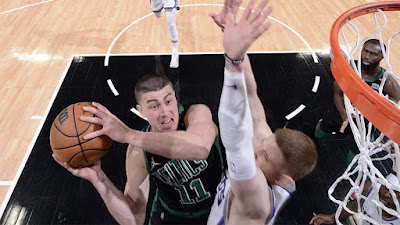 The Celtics cruised past the Sacramento Kings 126-97 at the Golden 1 Center Friday night for their second straight win.
Jayson Tatum led all scorers with 32 points and hit 7-of-10 from deep, while Jaylen Brown had 30 points on 11-of-18 shooting. Payton Pritchard continued his recent offensive burst by netting 14 points on a perfect 4-of-4 from beyond the 3-point arc, to go along with eight assists and Daniel Theis added 11 points, five rebounds off the bench for the Celtics -- who are 43-28 on the season.

"Great energy from the start," said C's coach Ime Udoka. "In general, offense crisp, good focus, regardless of who they were playing, and that's what we have to do."

Domantis Sabonis finished with 30 points and 20 rebounds for the struggling Kings, who have lost nine of the last 12 since the All-Star break and are on pace to miss the postseason for an NBA-record 16th straight year.
Justin Holiday had 21 points on 6-of-12 from 3 and Trey Lyles added 19 points for Sacramento -- who have fallen to a 25-47 record.
Kings' point guard De'Aron Fox did not play after injuring his right hand earlier in the week.
Tatum and Brown set the tone early, much like they did in the Celtics' 53-point blowout win over the Kings back in January, jumping to a 21-point lead midway through the second quarter. Sacramento had 12 turnovers in the first half that were converted into 20 fast-break points.
Boston had a 67-48 advantage at intermission with Tatum and Brown combining for 42 points on 17-of-23 made field goals in the first two quarters. The second half was much of the same, despite the Kings going on a 14-0 run late in the third period, but the C's took a 92-79 advantage into the final frame and were ahead by as much as 29 the rest of the way.

"We're much more upbeat," Tatum said in his postgame presser. "We're having a lot more fun and we're winning. Once you're winning that cures a lot of things. It's always fun playing that way."

Tatum notched his 24th game with at least 30 points and Brown has 13 games with 30 or more so far this season.
The Celtics have outscored the Kings by a combined 82 points in their season series and picked up their first win in Sacramento since March of 2019.
With 11 games remaining, Boston finds themselves currently as the fourth seed and a game behind second place in the East. They'll head to Denver to face the Nuggets (42-29) Sunday night.