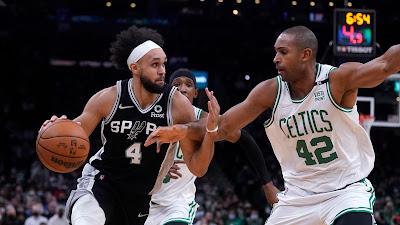 The Celtics were very active ahead of Thursday's 3 PM NBA trade deadline, after acquiring combo guard Derrick White from the San Antonio Spurs in exchange for Josh Richardson, Romeo Langford, their 2022 first-round pick and another first-rounder in 2028, according to ESPN's Adrian Wojnarowski.
Per insider Zach Lowe, Boston's 2022 first round pick is top-4 protected, while the Spurs will have the right to swap first-round picks with the C's in 2028.

Boston will be sending out a 2022 first-round pick, protected 1-4, to the Spurs in this deal, sources tell ESPN. https://t.co/7luSTmmXZv

Spurs will also have the right to swap first-round picks with Boston in 2028, sources tell ESPN. https://t.co/eQD9MrQ9ta


The move sends out around $4 million in salary to Orlando when the Celtics were about $800,000 above the tax line prior to the Richardson and Langford trade. This also leaves some flexibility in case Jaylen Brown still gets his $1.9 million All-Star bonus if he's chosen to replacement an injured player.
Joel Pavón
Follow @Joe1_CSP