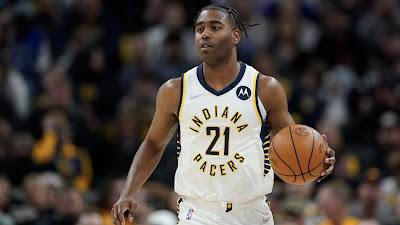 The Celtics announced on Wednesday afternoon the signing of forwards Kelan Martin and Malik Fitts to 10-day contracts.
Martin, a 6-foot-5 small forward, last played for the Indiana Pacers this season -- where he averaged 6.3 points and 2.0 rebounds in 27 games played (one start), before getting waived back on January 6.

The Butler alum already has a prior relationship with Celtics president of basketball operations Brad Stevens.

"Brad Stevens recruited him. There's already a previous connection there. You wouldn't know it because Brad didn't coach him, so it's easy to overlook the connection, but Brad knows exactly what type of player he's getting in Kalen," according to a league source shortly after the team acquired Martin.

Martin also brings a defensive intensity that will fit well into what Ime Udoka has been doing thus far, as the C's are one of the NBA's top teams on defense.

"He's really improved on the defensive end, it's something he's really committed himself to. He's able to guard multiple positions. I have seen him guard guards, guard bigs and wings. He's really fun to watch on defense."

As for Fitts, he's a power forward that went undrafted back in 2020 before landing with the Los Angeles Clippers G League affiliate, the Agua Caliente Clippers -- where he averaged 11.1 points and 4.0 rebounds in 14 games played during the 2020-21 campaign.
Fitts signed a Two-Way deal with the Utah Jazz just prior to the start of the 2021-22 season, splitting time between the NBA and the G League affiliate, the Salt Lake City Stars -- appearing in only seven games for the Jazz at five minutes per-contest, before being waived on January 13.
The Celtics currently have the sixth best record in the Eastern Conference at 34-26 after winning 11 of their last 13 games.
Joel Pavón
Follow @Joe1_CSP