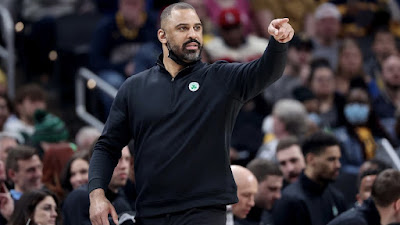 With the selection, Udoka becomes the first rookie head coach in Celtics history to earn the honor since K.C. Jones in 1984.

"Means we're playing well," Udoka said when asked about the award in his pregame presser Thursday night. "Bottom line. I mean those individual awards are really a reflection of the team and what they're doing. And, as I've said all year, our group is great and lets us push them, coach them hard. And that's where the results are showing for that. And so more than anything, means we're heading in the right direction.
"Those accolades come but, for me personally, it’s a reflection of those guys. I don't care about the personal but I care how we're playing, what direction we're going."

The Celtics finished the month of February with a 9-2 record, which also included a nine-game win streak that started at the end of January, as they won their first seven straight to start the month -- which was the second-best record in the league behind the Jazz (8-1).
After starting his coaching career 27-25, Udoka stuck to his switch-everything defense that eventually saved the Celtics season to grab the sixth seed at 37-27 heading into Thursday night against the Memphis Grizzlies.

"It means you're reaching them," Udoka said. "I've talked about it quite a bit, that the guys asked for that and then they've allowed us to coach them, which is not always the case. A lot of people will say one thing and when you're on them relentlessly, over and over about some of the things that you want to change or improve on, they'll either go south or not be receptive to them. Our guys have responded, as I mentioned, quite a bit."

"They're allowing us to push them," Udoka said of the roster. "We're in a good spot and just want to continue to grow from there. So the bottom line is they have to let you coach them and that's what it comes down to. Our group has been great as far as that."

While the Celtics finally look like they're buying into what Udoka is selling, the ultimate test will be how the team performs come playoff time. But so far it appears that the hire of Udoka was the right move for a franchise seeking to add another banner since 2008.
Joel Pavón
Follow @Joe1_CSP