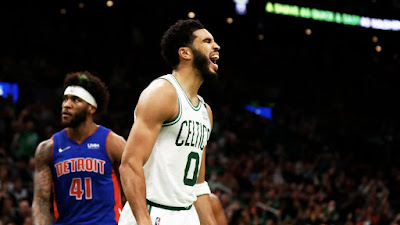 The Celtics held off the Detroit Pistons at TD Garden 114-103 Friday night for their fifth win in row.
Jayson Tatum continued his offensive tear, as he finished with 31 points, eight rebounds and six assists, while Jaylen Brown added 22 points, eight rebounds. Marcus Smart chipped in 20 on 6-of-10 shooting to help improve the C's to 41-27 on the season.

"They're a lot better than their record says," Smart said of the Pistons in his postgame presser. "When you're playing a team like that, sometimes you have a game that's a grind. They made you grind."

Robert Williams also had 12 points and nine rebounds for the Celtics, who have won 18 of their last 21 games.
Cade Cunningham had 27 points and eight rebounds Detriot, while Marvin Bagley III recorded a double-double of 20 points and 11 rebounds. Jerami Grant also scored 20 points, as the Pistons fall to 18-49 on the year.
The Celtics trailed by as many as seven in the first half and were down 62-61 at the break before another back and forth third quarter gave them a 92-90 advantage heading into the final frame.
Boston used a 7-0 run to start the fourth and give the C's their largest largest lead up until that point with 9:44 left to play. The Pistons missed their first 10 field attempts in the period to finish 2-of-15 from the floor.

"That's how the playoffs are going to be, so that's a nice test late in the season," Celtics coach Ime Udoka said. "You don't want it easy every night, you've got to figure things out. I'm happy we can figure out how to get it done."

Detroit was held without a made field goal for the first 11:29 minutes of the fourth quarter, as the Celtics outscored the visiting team 22-13 to hand them their second straight loss, as the C's led by as much as 18.
Despite Boston struggling from 3-point territory by going 6-of-32, including Tatum and Brown combining for 3-of-17, they were 24-of-30 from the free throw line

"I think a lot of times early in the year, that would spell doom for us," Udoka said. "It shows we're figuring out ways to score even when we shoot poorly. We got 30 free throws tonight. We're not so reliant on the three anymore, like earlier in the year."

The Celtics will look to make it six straight wins when they host the Dallas Mavericks (41-26) on Sunday afternoon. ABC has the tip-off at 3:30 PM ET.

Boston shot 46.7% from the floor, while the Pistons were 42.2% from the field and 10-of-34 from beyond the 3-point arc. The Celtics not only had 23 assists on 42 made baskets, but they also outscored Detroit 68-44 in the paint and won the battle off the glass 47-42.
Jayson Tatum topped 30 points once again, tying a career-best streak of five consecutive games.
Joel Pavón
Follow @Joe1_CSP