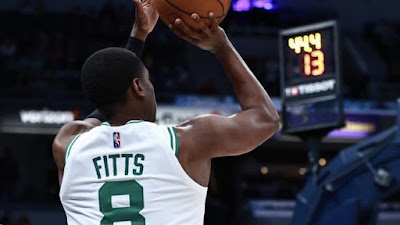 After two consecutive 10-day contracts, the Celtics are reportedly signing forward Malik Fitts through the 2022-23 season, according to ESPN's Adrian Wojnarowski.
Boston announced the signing via social media on Tuesday night but did not disclose the terms of the deal, which is only partially guaranteed, per Woj.

After consecutive 10-day contracts, the Boston Celtics are signing forward Malik Fitts through the 2022-2023 season, agents Nick Blatchford and Derek Jackson of UNLTD Sports Group tell ESPN. Fitts’ deal for next season will be partially guaranteed.


Fitts, who along with Kelan Martin, has been with the team since February 23rd, as both their second 10-day contracts expired on March 15 -- has earned himself a short-term deal to remain on the current roster for the foreseeable future. The 6-foot-5 wing shot 39.2% from 3 in college (95 games) before going undrafted in 2020. Since then, Fitts has hit 37.5% from deep in 12 games played at the NBA level for the Clippers during the 2020-21 campaign, followed by the Jazz earlier this season and the Celtics.
Martin, meanwhile, now becomes a free agent once again and is available to sign with another team. The Celtics have one remaining roster spot for the the time being with 13 games remaining in the regular season until the playoffs begin next month.
Joel Pavón
Follow @Joe1_CSP