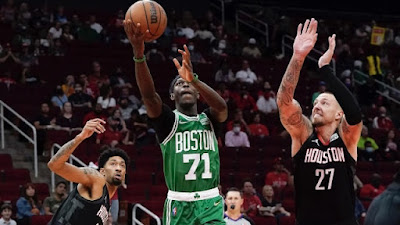 The Celtics just beat Thursday's deadline when their third trade of the afternoon was announced surrounding Daniel Theis, according to ESPN's Adrian Wojnarowski and The Athletic's Shams Charania.
The Houston Rockets agreed to trade the undersized big man to Boston in exchange for veterans Dennis Schröder, Enes Freedom and Bruno Fernando.

The Boston Celtics are trading Dennis Schroder to the Houston Rockets in package for Daniel Theis, sources tell @TheAthletic @Stadium.


Houston gets Enes Freedom and Bruno Fernando in the deal too, sources tell ESPN.


Theis returns to the Celtics where his NBA career started and played four and-a-half seasons before being traded to the Chicago Bulls at last year's trade deadline. The 6-foot-9 center is averaging 8.4 points and 5.0 rebounds, while shooting 46.9% from the field and 29.1% from 3 in 26 games (21 starts) with the Rockets.
With this move the Celtics welcome Theis to a somewhat thin frontcourt of Al Horford, Robert Williams and Grant Williams when it comes to the depth chart -- following Freedom (reportedly being waived) and Fernando heading to Houston.
Meanwhile, Schröder, who despite was the Celtics' third-leading scorer at 14.4 points and 4.2 assists per contest -- splitting time as a starter (18.6 points on 48.6% shooting from the field and 38.1% from deep) in 25 games and 24 as a reserve (9.9 points on 36.8% from the floor and 29.7% from behind the arc), the combo guard was never in the C's future plans.
In the last few days leading up to trade deadline, Schröder (reportedly seek a buyout) had been linked to teams that included the Bulls, Orlando Magic, Cleveland Cavaliers and even the Milwaukee Bucks -- who all showed some sort of interest.
The Celtics sent out about $4 million in salary by trading PJ Dozier and Bol Bol to the Magic for a second rounder, earlier in the day. Plus, they used the $17 million Evan Fournier TPE to acquire Derrick White from the San Antonio Spurs in exchange for Josh Richardson, Romero Langford and two first-round picks, which means they have five open roster spots and essentially are about $3 million under the tax line and have roughly $8.2 million to spend.
It's clear that Brad Stevens will be active on the buyout market for the immediate future to sign 10-day deals, veteran minimums and or convert a two-way into a standard contract.
Joel Pavón
Follow @Joe1_CSP