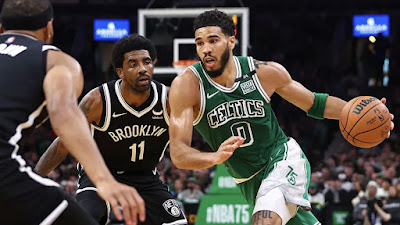 The NBA has named Jayson Tatum Eastern Conference Player of the Week following a 3-0 record for the Celtics to start the month of March.
The All-Star forward capped off his birthday week by averaging 41.3 points (league best) on 52.5% shooting -- plus 40.6% from deep and 84.4% from the free throw line -- to go along 6.3 rebounds and 5.0 assists.

Minnesota Timberwolves center Karl-Anthony Towns and Boston Celtics forward Jayson Tatum have been named the NBA Western and Eastern Conference Players of the Week, respectively, for Week 20 of the 2021-22 season (Feb. 28 - Mar. 6). pic.twitter.com/O8kxL2nX6c

It's the second time this season that Tatum has taken home Player of the Week honors, which now gives him six overall for his career, passing Kevin Garnett and Isaiah Thomas to slide into third place on the Celtics' all-time list of winners -- trailing only Paul Pierce at 17 and Larry Bird with 15.
After beating Trae Young and the Atlanta Hawks 107-98 on the first of the month with a near triple-double of 33 points, eight rebounds and seven assists, Tatum outshined Ja Morant on his 24th (not 19th) birthday by scoring 37 points in a 120-107 victory over the red hot Memphis Grizzlies at home.
Tatum saved his best performance for last when he dropped a season-best 54 points Sunday afternoon at TD Garden -- holding on to 126-120 win over the Brooklyn Nets, while outplaying both Kevin Durant (37) and Kyrie Irving (19) in the process.
It was Tatum's second 50-point outing of the season and second-highest scoring effort of his career (60 against San Antonio last April), as he shot 16-of-30 (53.3%) from the floor, 8-of-15 (53.3%) from beyond the 3-point arc and 14-of-17 (82.3%) from the charity stipe.
With this latest scoring output, Tatum now has six 50-point games including the postseason, which is the most in franchise history, passing Larry Bird's mark of four.
Tatum getting recognized as Player of the Week -- along with Karl Anthony Towns out West -- comes less than sevens days after Ime Udoka was named Eastern Conference Coach of the Month for February. The surging Celtics, who have won 21 of their last 27 games, currently have the fifth best record in the East at 39-27.
In 62 games this season, Tatum is averaging career-highs in points (26.5) and rebounds (8.2) to go along with 4.2 assists and 0.9 steals in 36.2 minutes per contest. He also has 21 games of 30-plus points, which are the most throughout any season of his NBA career.
Joel Pavón
Follow @Joe1_CSP