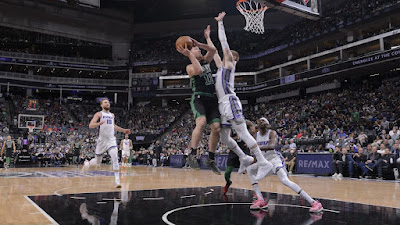 Payton Pritchard is finding his stride during the Celtics' best stretch of the season, following yet another great performance off the bench in the team's 126-97 blowout victory over the Kings Friday night.
The second year guard put up 14 points, five rebounds, eight assists and a steal in 21 minutes of action off the bench. Pritchard's performance also saw him shoot a perfect 5-of-5 from the field, which also included going 4-of-4 from deep and without a committing a single foul or turnover.

"People want to look at stats and numbers, but at the beginning of the year, I'm playing sometimes at the very end of games and different minutes," said Pritchard following the win. "I just come in, be ready, knock down shots, play hard defense, make plays, be a winning player. For me, once the trade deadline happened, that was my mindset to come in and compete and keep earning more trust from the coaching staff."

It was only a season ago that Pritchard was seeing upwards of 19 minutes a game and was a regular fixture in then coach Brad Stevens' rotation, before his playing time dropped significantly to barely 13 minutes per contest, while battling with veterans like Dennis Schröder and Josh Richardson to crack the backcourt depth chart earlier this year.
Now over a month since both Schröder and Richardson were shipped out west, Pritchard has gotten the green light and is taken full advantage of the newly given opportunities to prove his worth by making shots late in close games. Prichard, who is hitting 38% of his 3s this season, has bumped that to 44.7% since the All-Star break -- becoming a reliable threat to knock down a much needed bucket when opponents are locking up Jayson Tatum or Jaylen Brown on defense.

"I mean, it's big having a guy that can space the floor and knock down those shots," Tatum said of Pritchard during Friday's postgame presser. "He just makes us more dynamic, and it builds confidence. There's nothing better than seeing the ball go through the net, especially as a shooter. So happy for him and [hope he] keeps it going."

Celtics coach Ime Udoka can also appreciate a go-to shooter in crunch time to come off the bench and take the pressure away from his stars, especially when others like Derrick White have been struggling as of late (22% from 3 since becoming a Celtic) from distance.

"It's huge," Udoka added of Pritchard during his postgame comments. "He's obviously one of the best shooters. The trick of him was to learn to play off the ball more and understand that we have Marcus, Derrick, Jayson, Jaylen that can handle and create shots for him. At times, he's a great screener and popper and he mixes it up and we bring some smaller matchups into it. So, he's done a great job of not just handling it but playing off the ball."

"Him being one of our best shooters, guys are really looking for him," Udoka said. You can feel it, you can see it, they're looking for him in transition. So, it just adds another layer to our team. But the confidence part was always there for him. It's just a matter of the opportunity."

No one knows about taking advantage of opportunities more than Pritchard, who also is well aware of what he's capable of once given the chance.

"My shot's always been there. Anybody in practice knows that a lot of times with people shooting, it takes time to get the flow back of things," said Pritchard.

As for the Celtics (43-28), who are 8-2 in their last 10 games and the playoffs around the corner, they'll need all the weapons they can get off the bench and Pritchard is definitely one of them come the postseason.

"At the end of the day I'm a basketball player," Pritchard said. "You could put me anywhere on the court, and I'm going to try to make something happen."

Pritchard and the Celtics head to Denver to take on the Nuggets Sunday, before they wrap up their west road trip in Oklahoma City Monday for a second night of a back-to-back.
Joel Pavón
Follow @Joe1_CSP