Isaiah Thomas calls not getting another opportunity with Celtics 'frustrating' 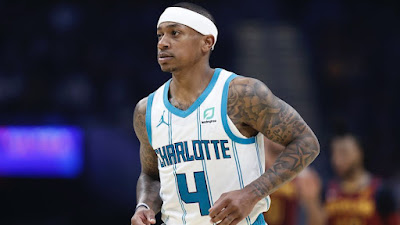 Isaiah Thomas spoke to the media Tuesday ahead of tomorrow night's matchup between the Celtics and the Charlotte Hornets.
The veteran guard was pretty candid on how he felt about not getting a second chance to come back and play for Boston. When was asked if there had been any sort of communication with C's president of basketball operations Brad Stevens at any point this season about a possible "reunion in Boston," Thomas gave his honest reply.

"I mean I've tried to have conversations about that," Thomas replied. "It's hard to speak on because I've opened my arms to try to come back in so many ways. It's not even about playing and trying to pick up where I left off. I'm past that moment but I know there's been times where I can help in that locker room.

"I'm not in there every day so I can't speak on what's going on. This is from the outside looking in," Thomas added, "but I've felt there's been times where Brad [Stevens] could make a call and give me an opportunity and it hasn't happened."

Thomas, 33, played with the Celtics for two and a half seasons (2015-17), in which he was a two-time All-Star and league MVP candidate, while helping lead the team to their first Eastern Conference Finals berth in five years.
Following that historic 2016-17 campaign, Thomas was traded to the Cleveland Cavaliers for Kyrie Irving -- the only time in NBA history that the first and last pick (60th) from the same draft class (2011) were swapped for one another. In the years since Thomas has played for six teams, the last four being on 10-day contracts, including the previous three which have been this season alone and while he's been available on several occasions for the Celtics to possibly re-sign, they simply haven't seemed interested in bringing back the fan favorite.
While Stevens coached Thomas during his short-lived time in Boston, he just hasn't made that long awaited phone call that the point guard's been expecting for that potential comeback.

"That's very frustrating because of the relationship we have and the friendship we've been able to have over the years," Thomas explained. "I felt like there have been opportunities to make that happen and it hasn't so that's disappointing in a lot of ways because I love Boston. I love everything about the city of Boston, and the people who have showed me the most love are obviously from Boston."

Current Celtics coach Ime Udoka spoke on Thomas and the team's thought process when it comes to the point guard position.

"Regarding Isaiah, point guard was never really a position of need," Udoka told reporters during his post-practice presser Tuesday, adding that the team has plenty of depth.

Still, it appears Thomas is not necessarily seeking playing time, but yet knows he can fill a role that will help out a roster like the Celtics even if it doesn't seem like it'll ever happen.

"It's frustrating but I've done my part in so many ways of trying to make a comeback, make a reunion, and it's not even about playing," said Thomas. "I could just help, I tell everyone that, I can help without putting the ball in the basket. A lot of people understand that and know that."
"Things happen, I’m not faulting anybody but I just thought with how close we are and how close I am to a person like that, I thought there would be an opportunity but there isn't," Thomas concluded. "You move on and wish them well. I still have a lot of love for everyone who impacted my life in the city of Boston."