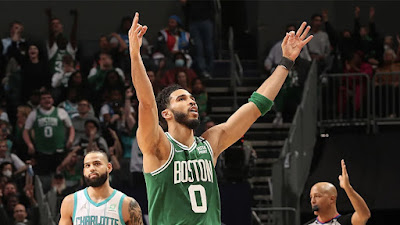 The Celtics remain undefeated in the month of March after beating the Charlotte Hornets 115-101 at the Spectrum Center Wednesday night.
Jayson Tatum, who dropped a season-high 54 points against the Brooklyn Nets three days prior, picked up where he left off and followed it up with 44 points on 16-of-24 shooting -- including going 6-of-9 from deep.

It was Tatum's fourth straight outing of scoring at least 30 points and his fifth overall in the last seven. The All-Star forward has scored 98 points in the last two games, tying Kevin McHale for the most points combined in consecutive games in franchise history. He also becomes just the third Celtic to hit the 40-point mark in back-to-back regular season games behind Paul Pierce (2001) and Isaiah Thomas (2017).
Jaylen Brown finished with 15 points, five rebounds and five assists, while Marcus Smart added 12 points, nine assists. Robert Williams (11 points, 11 rebounds) and Al Horford (10 points, 10 rebounds) each recorded a double-double for the Celtics, who are 40-27 on the year.
Miles Bridges and P.J. Washington both led the Hornets with 17 points apiece, while LaMelo Ball had 15 points and eight rebounds. Terry Rozier struggled on 5-of-17 shot attempts and 2-of-9 from 3 to register 14 points for Charlotte, who have lost two in a row and four of their last six to fall to 32-35.
The Celtics led 52-48 at the half before they outscored Hornets 35-30 in the third quarter to take a 87-78 advantage into the final frame.
Boston opened up the period on a 14-4 run that eventually turned into a 21-point margin -- the largest of the night. Tatum's midrange jumper with 3:32 left to play gave the Celtics a 113-94 lead and 18 fourth-quarter points that led to Charlotte doubling the All-Star on defense, in trying to avoid back-to-back nights of having an opposing player go for 50 -- following Kyrie Irving's Tuesday evening's performance.
The Celtics held the Hornets to 42.9% shooting and 8-of-32 from beyond the 3-point arc, while forcing 16 turnovers and finishing with 30 assists on 46 made baskets.

"We want to have an unselfish team that plays a good appealing brand of basketball and I think we are doing that," said Udoka on his team's recent success. "We are making the extra pass and getting guys wide open looks, that's all you can ask for."

Derrick White came off the bench to contribute 11 points and eight assists, which combined with Smart had 17 of the team's 30 dimes and only one turnover between the two point guards.
The Celtics will look to make it five straight wins when they return to TD Garden and host the Detroit Pistons (18-48) Friday night.

Boston shot 49.5% from the field and 12-of-37 from 3-point territory, while outscoring Charolotte in the paint 56-52 and outrebounding them 47-46.
Hornets guard Isaiah Thomas scored five points and dished out two assists in 11 minutes against his former team, after commenting on how it was "frustrating" that the Celtics hadn't tried to re-sign him on multiple occasions that he's been available over the past few years.
Joel Pavón
Follow @Joe1_CSP