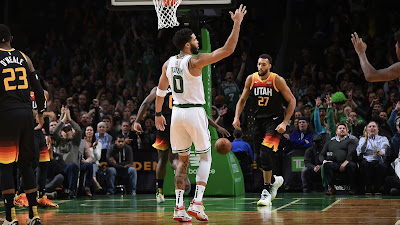 The Celtics extended their win streak to five following a 125-97 blowout victory over the Utah Jazz Wednesday night at TD Garden.
Jayson Tatum and Jaylen Brown combined for 52 points on 19-of-32 shooting, including hitting 8-of-14 from deep, while Marcus Smart recorded a career-high 13 assists. Grant Williams notched back-to-back double-doubles, this time with 12 points and 10 rebounds for the Celtics, who are now 46-28 on the season and 2.5 games out of first place in the East.

"As many games we blew in the first half of the season -- it would have been nice to have won some of those games because we would in first right now," said Brown during his postgame presser. "But everything happens for a reason. We take it one game at a time and we'll see where we're at playoff time."

Despite Donovan Mitchell scoring 37 points on 13-of-24 from the field, he was limited to 3-of-12 from beyond the 3-point arc. Ruby Gobert added 14 points and 11 rebounds for the 45-28 Jazz, who have lost consecutive games for only the first time in nearly two months (21 games).
Boston jumped out a 30-15 lead to start the first quarter and never looked back, as they took a 68-45 advantage into the break.
The C's led by as many as 32 points in the second half and the Jazz never cut the deficit by anymore than 18 the rest of the way. Utah was held to 39.8% overall from the floor and 8-of-36 from 3.

"Guys are confidant, playing free and playing together," Ime Udoka said after the win. "I think we all feel there's another level we can take it to."

The Celtics have a few days off until they host the Minnesota Timberwolves (42-32) Sunday night at 6:00 PM ET.