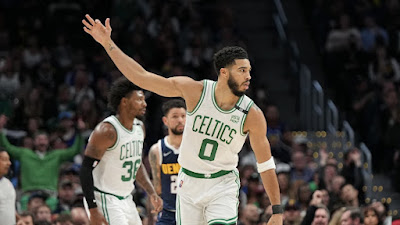 Jayson Tatum has won Eastern Conference Player of the Week honors, the NBA announced Monday afternoon.
This will be the third time that the Celtics forward has been recognized by the league this season and the second time this month. Tatum won the award two weeks ago and prior to that back in December.

Minnesota Timberwolves center Karl-Anthony Towns and Boston Celtics forward Jayson Tatum have been named the NBA Western and Eastern Conference Players of the Week, respectively, for Week 22 of the 2021-22 season (March 14 - 20). pic.twitter.com/4t2FpZk7x7


Tatum averaged 29.3 points on 59.2% shooting (57.1% 3-PT, 93.3% FT), to go along with 7.7 rebounds, and 5.0 assists in three road games that resulted in all Celtics wins – at Golden State (March 16), Sacramento (March 18), and Denver (March 20).
He was one of four Eastern Conference players to average 29.0 points and 7.0 rebounds, and the only one of that group to shoot at least 52.0% from the field. The fifth-year pro and three-time All-Star reached the 30-point mark in each of the last two games of the week, while shooting 69.7% from the field and 13-of-20 from beyond the arc during that stretch.
The Celtics are 8-1 in the month of March and at 44-28, they are currently the fourth seed in the East. They'll look to sweep their four-game west road trip tonight against the Oklahoma City Thunder