Celtics 120, Grizzlies 107: Jayson Tatum drops 37 on his birthday to beat Memphis at home 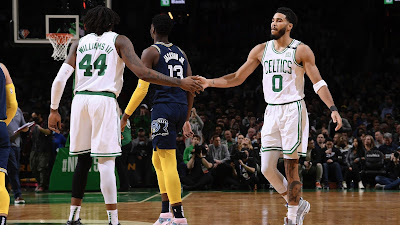 The Celtics keep on rolling even without Jaylen Brown, as they beat the Memphis Grizzlies 120-107 Thursday night at TD Garden.
Jayson Tatum dropped 21 of his 37 points in the fourth quarter to finish with 14-of-25 shooting, six assists and five assists on his 24th birthday.

"It was a lot of fun. The place was electric tonight," said Tatum during his postgame presser.

It was the battle of the All-Stars between Tatum and Ja Morant, who scored a game-high 38 points to go along with seven assists for Memphis after registering only eight points at halftime.

"I think it was just kind of one of those moments -- two guys just going at it and doing what they can to try and will their team to a victory," Tatum said. "It just so happened that it was kind of a back-and-forth thing."

Despite Morant netting 14 points in the third quarter and 16 in the fourth, it was not enough to stop a surging Boston team that had five players reach double-digit scoring.
Al Horford was one of three C's players to record a double-double -- going off for 21 points, 15 rebounds and five assists. Marcus Smart added 18 points, 12 assists and Robert Williams chipped in 10 points, 12 rebounds in the team's 13th victory over their last 15 games.
Jaren Jackson had 20 points and seven rebounds for the now 43-21 Grizzlies, while Desmond Bane finished with 17 points and seven assists.
The Celtics led 47-45 at the break before using a 10-2 run to open up the third quarter and took a 83-72 advantage into the final frame. Memphis scored seven quick points to cut the deficit 86-79 with 10:27 left to play.
The Grizzlies didn't go away after a Bane 3 got them within seven once again (91-84), Tatum scored eight unanswered points to put Boston ahead 99-84. Memphis made one last attempt to cut into the C's  lead but it was just too much Tatum who scored another eight straight to match Morant. Despite both teams scoring the next 16 points apiece -- Tatum lunched the final dagger with a 3-pointer, blowing a kiss to the crowd, as Boston was up 115-100 with 1:34 left to play.
Memphis was held to 42.4% from the floor and 13-of-40 (32.5%) on 3-pointers, while the Celtics shot 51.7% from the field and 16-of-37 from deep to improve to 38-27 (a season-high 11 games over .500).
Ime Udoka was named Eastern Conference Coach of the Month for February, after guiding his team to a 9-2 record, which also included a nine-game win streak (seven straight to start the month).

"The main thing -- it means we're playing well and that's the bottom line. When you get recognition, it's a reflection on the guys," Udoka said. "They're letting us coach them, letting us push them and learning and growing throughout the season. Kind of what we thought we'd have when we got healthy."

The Celtics will host the Brooklyn Nets (32-32) Sunday afternoon at a 1:00 PM ET matinee tip-off on ABC.

Boston finished with 33 assists on 46 made baskets, while outrebounding the Grizzlies 51-44 and outscoring them in the paint 52-44. The Celtics also committed 14 turnovers -- including 11 in the first half and just three in the last two quarters.
Jaylen Brown sat out with a right ankle sprain and Aaron Nesmith left early in the first quarter and did not return after he rolled his right ankle (listed as day-to-day). Derrick White (12 points off the bench) went to the locker room following what is being called a stinger when he bumped his elbow into Brandon Clarke late in the third period. Udoka said though White was able to return, "we just didn't need him at that point."
Joel Pavón
Follow @Joe1_CSP