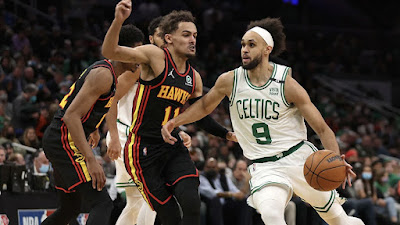 The Celtics overcame a 17-point deficit to beat the visiting Atlanta Hawks 107-98 Tuesday night at TD Garden.
Jayson Tatum finished with a game-high 33 points on 12-of-25 shooting to go along with eight rebounds, while Derrick White and Grant Williams each scored 18 respectively off the bench to help Boston win 12 of their last 14 games.
The C's were able to bounce back and recover after Jaylen Brown left the game less than three minutes into the first quarter due to a right ankle injury. Marcus Smart, who had 16 points, spoke about what it meant for his teammates to rally from a double-digit hole without the roster's second leading scorer.

"It just shows, that if we continue to come out like this, this is the team that we are," said Smart in his postgame presser. "This is the identity that we have. It's going to be hard for teams."

Trae Young, who also appeared to roll his ankle in the first quarter, did return after a brief trip to the locker room to lead Atlanta with 31 points and six assists. Bogdan Bogdanovic netted 25 points and Danilo Gallinari chipped in 12 points, eight rebounds for the 29-31 Hawks.
Being down as many as 17 in the first half, the Celtics trailed 65-51 at the break, before they used a 14-0 run to open up the third. White score eight points in the last 5:08 of the quarter to give Boston its first lead since the opening period and never looked back.
The C's outscored the Hawks 31-13, as they took a 82-78 advantage into the final frame. Young was held to just nine points in the last two quarters, as Boston was ahead by as much as 14 after Grant Williams hit back-to-back 3's on two defensive plays by Smart to put them up 102-88 with 3:11 left.
In the end the Celtics' aggressive defense is what made the difference in the second half, limiting the Hawks to 13-of-39 shooting from the field, including 2-of-16 from behind the 3-point arc and outscoring them 56-33 to split the season series 2-2 (all four games won by the home team).

"It's part of us. It's part of me. It's something that when we're being physical, it helps us on the defensive end. But also on the offensive end," Smart said after the win.

Atlanta shot 7-of-31 (22.6%) from 3-point territory and 43.4% from the field overall in a tale of two halves.
Meanwhile, Boston's coach Ime Udoka gave an update on Brown, as the wing immediately grabbed his right leg when he fell to the floor. But, he was able to walk on his own to the locker room and it looks like Brown is listed as day-to-day and "it doesn't seem like it" is a long-term issue.

"Rolled it, had some swelling and soreness," said Udoka after the win. "He tried to give it a go in the back and wanted to come back out and play. But we felt big picture, where we are in the season, just be smart."

Boston hit 47% of their shot attempts, including 11-of-35 from deep. They also handed out 27 assists on 36 made baskets, led by Tatum with seven, White and Smart each added five a piece. The Celtics outrebounded the Hawks 47-37 and won the battle in the paint on the offensive end 46-38.
Joel Pavón
Follow @Joe1_CSP