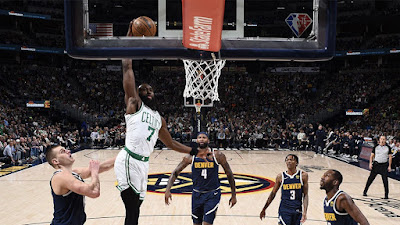 The sizzling Celtics had another dominating offensive performance to hold off the Denver Nuggets 124-104 at Ball Arena Sunday night.
Jayson Tatum led all scorers with 30 points, to go along with seven assists and six rebounds, while Jaylen Brown also netted 30 points. Payton Pritchard once again was perfect from the field, including going 5-of-5 from 3-point range to finish with 17 points off the bench. Grant Williams added 13 points for the Celtics, who have won their third straight and nine of their last 10.
Boston shot it at a high clip of 57.3% from the floor, hitting19-of-40 (47.5%) from deep and even went 11-of-11 from the free throw line.
The C's on defense held the Nuggets to 40.2% shooting, including limiting the reigning league Most Valuable Player in Nikola Jokic to 8-of-23 from the field and 23 points, eight rebounds.

"Physicality," Celtics coach Ime Udoka said. "He was comfortable early. He had 12 in the first quarter, four in the second and seven the rest of the way. He was too comfortable early, gave him too much air space. It's mixing up looks, keep him off balance, switching matchups and giving him different bodies."

The Celtics fans in attendance made their presence be known when chants of "MVP" echoing throughout the arena for Tatum at various moments during the game.

"It's a great feeling, Tatum said in his postgame presser. "You expect that, get that at home, but when you travel and you see all the Celtics jerseys and T-shirts and hoodies and hear them chanting for you on the road, that's an incredible feeling."

Aaron Gordon had 13 points and DeMarcus Cousins chipped in 12 for the Nuggets, who have lost four of their last six games.
Boston capped the second quarter on a 46-21 run, as Tatum and Pritchard each hit four 3s. The Celtics final 15 points of the first half came on 3-pointers and Tatum nearly hit a 40-footer at the buzzer, but it rimmed out and they were ahead 68-43 at the break.
Denver used a 12-6 run to open up the third period before the Celtics responded with a 14-7 spurt of their own and eventually took a 98-75 lead into the final frame.
Boston led by as many as 28 points, while also dishing out 29 assists on 47 made baskets. They also outscored the Nuggets 44-36 in the paint.
The Celtics (44-28) will wrap up their four-game west road trip Monday against the Oklahoma City Thunder (20-51) on a second night of a back-to-back.
Joel Pavón
Follow @Joe1_CSP