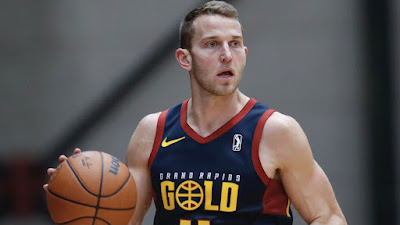 The Celtics are reportedly signing forward Nik Stauskas to a two-year contract, according to ESPN's Adrian Wojnarowski.
It was not too long after the conclusion of the C's beating the Memphis Grizzlies 120-107 Thursday night, when news of the deal broke, which covers the rest of this season and next. However, its unknown if next year is guaranteed or not.

Nik Stauskas is signing a two-year deal with the Boston Celtics, his agents Mark Bartelstein and Andy Shiffman of @PrioritySports tell ESPN. Stauskas had an historic week, scoring 100 points on 57 and 43 point performances in back-to-back games for Grand Rapids.


Stauskas has played for six teams over his seven-year NBA career, including the Miami Heat earlier this season on a 10-day contract. He has averages of 5.5 points and 1.5 rebounds while shooting 35.4% from deep.
The 6-foot-6 wing scored 100 points combined in his last two G League games for the Grand Rapids Gold, including a 57-point performance on Tuesday. Stauskas set the record for most points in a half with 38.
The Michigan alum was the eighth overall pick in the 2014 NBA Draft and in 14 games played in the G League this season, Stauskas averaged 26.0 points, 5.9 rebounds, and 4.8 assists while shooting 51.4% from the field and 46.6% from behind the arc on 8.4 threes attempted per game.
Before his brief stint in Miami earlier this year, Stauskas last played in the league during the 2018-19 campaign, in 68 games with the Portland Trail Blazers and the Cleveland Cavaliers.
With the signing of Stauskas, the Celtics currently do not have any remaining open roster spots, but both Kelan Martin and Malik Fitts are on 10-day contracts. Boston could add another permanent player to the mix by simply waiting until one (or both) of those deals expire to make a move. They also added Matt Ryan to their roster on a two-way deal earlier this week.
Stauskas' arrival could mean some immediate playing time right away for the veteran. The Celtics may be still without Jaylen Brown come Sunday when they face the struggling Brooklyn Nets, as Brown sustained a right ankle sprain against the Atlanta Hawks on Tuesday. Meanwhile, Aaron Nesmith -- who started in Brown's place -- also suffered a bad sprain when he rolled his ankle on Thursday during the first quarter of the Celtics' win over the Grizzlies.
The C's host the Nets (32-32) at TD Garden in a 1:00 PM ET Sunday afternoon matinee tip-off on ABC.
Joel Pavón
Follow @Joe1_CSP