Nik Stauskas was 'ready to give in' before Celtics called 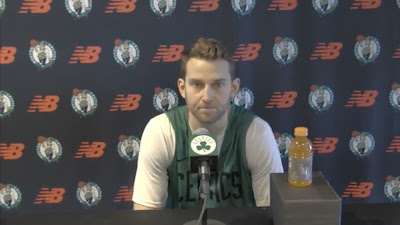 Before the Celtics signed Nik Stauskas, he was not sure he wanted to keep playing basketball for a living.
According to the veteran wing, when asked if thoughts about walking away from the game ever entered his mind, Staukas said he had considered giving it up just prior to getting that phone call from the C's.

"Just five days ago, I was ready to give in, to be honest," he said in his first post-practice presser Tuesday. "Just playing in the G-League all year. I had told myself that if it didn't work out this year, that I'd be OK with walking away from the game. It's just crazy that in the last 72-96 hours that everything kind of transpired the way it did."

Stauskas, the eighth overall pick in the 2014 NBA Draft, has played for six teams -- including the Miami Heat on a 10-day earlier this season -- but during his prior two years out of the NBA (last played during the 2018-19 campaign), the Michigan alum found himself in the G League and even in Spain.
Now at the age of 28, Stauskas landed with the Grand Rapids Gold, where he averaged 26.0 points, 5.9 rebounds, and 4.8 assists while shooting 51.4% from the field and 46.6% from behind the arc on 8.4 threes attempted in 14 games played this season before signing a two-year deal with the Celtics last week.

"It's been a long time coming for me, personally, just to kind of get back to this point, kind of cracking a roster," Stauskas said. "I've been out of the league for two years so, definitely very grateful for Brad Stevens giving me this opportunity.
"And now, I'm just trying to make the most of it here, trying to learn this system, trying to become friends with all these guys and the coaching staff and, so far, I've only been here for a couple of days, but have nothing but good experiences so far."

Celtics coach Ime Udoka was asked Tuesday about how he's integrating new players to his system thus far such as Derrick White, Daniel Theis and even with the addition of Stauskas.

"It's a lot of individual talks, honestly, and 1-on-1 film sessions," Udoka said during his post-practice comments. "We'll do what we do with the team but to get them up to speed is similar to what we did when we were having the COVID situation, where we did a lot of 1-on-1 and teaching as far as that. Their film, throwing them in live game action, there's some things that they’re going to be a little slower to get."

Stauskas, who scored 100 points combined in the last two games with the Grand Rapids Gold, is no stranger to adapting into new situations, as he's excited for another opportunity to contribute on a playoff roster.

"If I'm not going to play, I'm going to be the first guy waving the towel, pumping everyone else up," Satuskas said. "For me, that's growth because that's something that I wasn't willing to do just a couple years ago in my first stint in the league.

"Once I had that taken away from me, I think it gave me that perspective I needed to just be very grateful, as I've said before. For me, mentally, it's kind of good to have that new perspective and just be appreciative of everything that's been given to me."