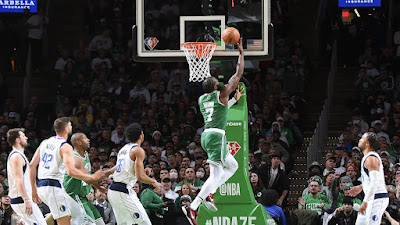 The Dallas Mavericks played spoilers Sunday afternoon when they came into TD Garden and beat the Celtics 95-92, on the same day Kevin Garnett was set to get his No. 5 jersey retired.
Luka Doncic led all scorers with 26 points (8-of-16 from the field), including hitting the game-tying 3 (4-of-10) with 1:21 left, before Spencer Dinwiddie made the game-winning 3 with 11.6 seconds to play with Garnett sitting courtside, as the Mavs snapped Boston's five-game win streak in the process.
Dorian Finney-Smith added 19 points, while Jalen Brunson chipped in 14 for Dallas, who have won seven of their last eight.
Jayson Tatum had 21 points -- ending five consecutive games of scoring 30 or more -- to go along with 11 rebounds, but missed an off-balance 3-pointer in the final seconds to send it into overtime. The three-time All-Star struggled from the field, going 7-of-23 and 3-of-10 from deep.
Al Horford scored 17 points on 6-of-10 from the floor, while Marcus Smart finished with 15 points, seven rebounds. Jaylen Brown also had a bad shooting game (6-of-16), netting only 14 points, despite having two highlight dunks, including one that even got Garnett out of his seat to greet the star wing.
The Celtics led 47-38 at the break and pushed the deficit to as many as 13 in the first four minutes of the second half, but Dallas finished the third quarter outscoring the home team 38-26 and took a 76-73 advantage into the final frame.
Both teams had 19 points a piece in a low scoring fourth quarter that featured three ties and four lead changes. Tatum made a go-ahead layup and Smart hit a pair of free throws to put Boston up 92-89 with 2:38 remaining. Doncic tied it up with a 28-footer and 1:21 left before a Maxi Kleber block on Brown's layup and a missed Tatum mid-range jumper set up a Dinwiddle 3-pointer to give the Mavs a 95-92 lead.
Doncic was called for a foul on Smart shooting a 3 with 4.9 seconds left, but following a coach's challenge for Dallas, the call was overturned. Tatum missed the potential game-tying 3 after the jump ball at halfcourt in the final 2.2 seconds.

"They did a good job of mixing up the looks, the coverages, making us play a different way we haven't really played much," said Al Horford in postgame presser after recording a career-high five steals.

The Celtics at 41-28 will head out west on a four-game road trip beginning on Wednesday against the Golden State Warriors (46-22). ESPN has the tip-off at 10:00 PM ET.
Joel Pavón
Follow @Joe1_CSP