Jaylen Brown ruled out against Grizzlies due to ankle sprain 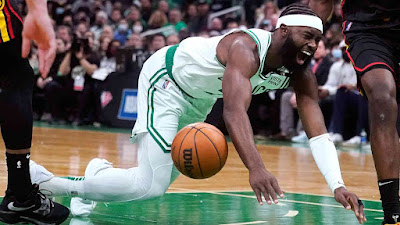 Jaylen Brown will not play Thursday night when the Celtics host the Memphis Grizzlies after a right ankle sprain forced him to miss all but the first three minutes of action against the Atlanta Hawks.
The team announced Brown would be out following Wednesday's shootaround, as coach Ime Udoka said he was day-to-day and it's likely that it wouldn't be a long-term thing.


Brown rolled his ankle on a hard drive early in the first quarter while trying to split two defenders. He immediately grabbed his right leg when he hit the floor during the non-contact injury. It was ruled an ankle sprain and he was able to walk on his own into the locker room. After the game, Udoka gave an update, including that Brown wanted to re-enter the game.
Still, the Celtics will be without arguably their best two-way player when Ja Morent and the high-tempo Grizzlies, who have the third best record in the West, come into the TD Garden to test the NBA's top defensive team since January 1.
Look for Aaron Nesmith, who started in the second half of the Celtics' 107-98 win over Atlanta, to see increased minutes along with Derrick White.
Udoka spoke very highly of Nesmith, despite not scoring a single point, but the C's coach was pleased with his energy at a moments notice.

Aaron impacted the game without making a shot [Tuesday night], and he did it with his physicality, defense, energy...got some offensive rebounds," Udoka said in his postgame presser.

TNT will have the tip-off tonight between the Celtics and Grizzlies beginning at 7:30 PM ET.
Joel Pavón
Follow @Joe1_CSP