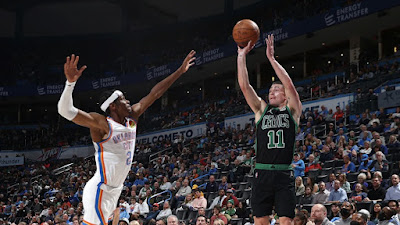 The Celtics held on to beat the Oklahoma City Thunder 132-123 Monday night at Paycom Center to sweep their four-game west road trip.
Jayson Tatum scored 36 points to lead all scorers on 11-of-19 shooting and 5-of-11 from 3-point territory. Jaylen Brown had 25 points on 10-of-19 from the field, while Grant Williams notched his first career double-double with 20 points (7-of-14 from the floor) and 10 rebounds.

"We came out with the right mindset offensively," C's coach Ime Udoka said after the win. "Obviously, the second half was a little bit different. But we talked about going 4-0, finishing the [road] trip on the right foot and did that ultimately."

Marcus Smart (non-COVID related illness) and Robert Williams (knee) both sat out, as Derrick White and Payton Prichard stepped it up in the backcourt to each finish with 18 points respectively -- while also combining on 7-of-16 from deep, to go along with eight rebounds and seven assists -- for the Celtics, who are 45-28 on the season
Tre Mann netted 35 points (7-of-12 from 3) and Shai Gilgeous-Alexander added 35 points, nine assists. Darious Bazely chipped in 22 points and 10 rebounds, while Aleksej Pokusevski contributed with 19 for the 20-52 Thunder.
Boston opened up the game with a 13-0 run and never trailed once, as they took a 65-51 advantage into the break. They outscored the Thunder 43-33 in the third period and led by as many as 26 points.
Oklahoma City used a 18-7 run to cut the deficit down to single digits (126-117) with 2:01 left to play. Despite a 39-point output in the fourth quarter by the Thunder, their rally came up short and they were handed their 10th straight loss.

"They kept pushing and we got relaxed," Udoka said. "They have some talented guys that got going late. Could be the end of the trip or second night of a back-to-back, whatever it may be. It's not always going to be the prettiest game, but we did well enough to maintain what we have, but we've got to be more focused."

Both teams shot over 51% from the field and connected on at least 15 3-pointers a piece, while each also grabbed 42 rebounds. However, the Thunder did outscore Boston 60-56 in the paint.
The Celtics return to TD Garden to host the Utah Jazz (45-27) come Wednesday night at 7:30 PM ET.