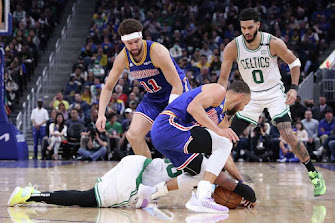 The Golden State Warriors will be without All-Star guard Stephen Curry for the immediate future with a sprained ligament in his left foot, according to Shams Charania of The Athletic.
Curry exited Wednesday night's 110-88 loss to the Celtics late in the second quarter to what was described at the time as left foot soreness following a collision for a loose ball with C's guard Marcus Smart. Per Charania, X-rays were negative and the Warriors' leading scorer avoided any significant damage.

Warriors star Stephen Curry has been diagnosed with a sprained ligament in left foot that will sideline him indefinitely, sources tell @TheAthletic @Stadium. X-rays on the foot returned negative Wednesday night – meaning no fracture or major damage, a sigh of relief.


ESPN's Adrian Wojnarowski reported Thursday that Curry will see a specialist and be re-evaluated in the upcoming weeks before the start of the playoffs next month.

Initial evaluation of Steph Curry's sprained ligament in his left foot offers optimism that he can return by the start of the playoffs in mid-April, but he's expected to see specialists soon for further evaluation, sources tell @ramonashelburne
and me.

Smart was asked about the back and forth with Kerr, saying more than once that "I'm not a dirty player," while explaining why he thought diving for a loose ball is nothing out of the ordinary and not a dirty play, despite the Warriors coach wanting to defend his star.

Me and Steve [Kerr] have that relationship with USA Basketball, so he knows I'm never trying to hurt anybody," said Smart in his postgame comments. "He knows since I got in this league I've been sacrificing my body for the better of my team and my teammates, so I get it -- I understand. I hate to see it happen to anybody, especially playing and doing your job. Hate to see any injury. I hope Steph's alright. We looked at it, I didn't even see him, just saw the ball and dove on the ball and tried to make a play. Unfortunately, that occurred and I'm really down right now about it."

Boston head coach Ime Udoka also commented on the play in question and the exchange between Smart and Kerr, calling "the play that they were complaining about was totally legal and not malicious," in his eyes.

"Obviously, the refs looked at it, I think and we knew it was a legal play, a good play," added Udoka Wednesday night. "I told Marcus, 'Don't worry about that. Let me handle all that.' And they had some words and our guys have the freedom to do that. If a coach is going to talk to him like a grown man, they can talk back and so I'm not really worried about that, but this credit, he kept his composure obviously, put up 20 and 8, and played through it.

"Bottom line [you] don't need to get in a back and forth with a coach but if you want to say your piece, I'm all for it."

Of course Warriors power forward Draymond Green, who played in just his second game after missing 31 straight with a back injury, weighed in on the play that he deemed "un-necessary" on Smart's part but not at all dirty.

"I'd expect Marcus Smart to make that play. He plays hard, I can't call that a dirty play," Green told reporters. "If it were a dirty play I would have dove into [Smart's] head. I had a pretty good look on the play -- maybe un-necessary, but that's the most I could call it...the ball is on the floor. At every level of basketball we're taught to dive on the floor and go after the ball -- that's what Marcus did, so I can't call it a dirty play. I will say it was probably an un-necessary dive."

While it seems the Warriors have dodged a bullet with Curry's injury, Celtics' opponents shouldn't expect Smart to stop diving for loose balls any time soon.

"That's what Smart does," said Jaylen Brown to the media about his teammate. "It's basketball. And it was unintentional, but that's what Marcus does -- he's the first to the floor every time. Both teams know that, so I don't know what the controversy is about."

The Celtics head to Sacramento Friday night to face the Kings and the Warriors are off until Sunday when they host the San Antonio Spurs.
Joel Pavón
Follow @Joe1_CSP