Robert Williams reportedly has a torn meniscus in left knee, out indefinitely 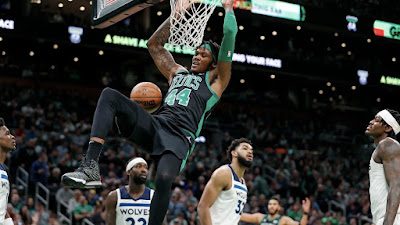 Celtics center Robert Williams has reportedly suffered a torn left meniscus, according to ESPN's Adrian Wojnarowski.
The 24-year old big man noticeably limped off the court late in the third quarter of Sunday night's 132-112 win over the Minnesota Timberwolves and did not return after the team called it a left knee sprain.

Williams was injured in Sunday night’s victory — Boston’s 24th in 28 games — and underwent an MRI today. Williams is first among 169 players who’ve defended 500-plus shots as the closest defender, per Second Spectrum tracking. Only Williams has held opponents sub-40 % shooting.


The Celtics released a statement Monday afternoon, but there was no timeline on a possible return for Williams, only that an update on treatment would likely be provided later in the week.


Boston's head coach Ime Udoka, who said Williams was was experiencing "quite a bit of pain" on the lateral side of his knee Sunday, spoke to the media about Williams' injury and confirmed that he will undergo surgery.

"We'll know in the next few days, evaluate some surgical options and know more then," said Udoka during Monday afternoon's presser.

Williams was enjoying a career-year and his most healthiest -- averaging 10.0 points, 9.6 rebounds, and 2.2 blocks this season.
In the meantime, the Celtics, who at 47-28 climbed into the No.1 spot in the East following their victory over the T-Wolves, are playing a second night of a back-to-back in Toronto and will be without Jayson Tatum and Jaylen Brown -- both out with knee soreness, along with Al Horford for personal reasons.
Boston reportedly signed 6-foot-7 forward Juwan Morgan from the Maine Celtics of the G-League today, per Shams Charania of The Athletic. In 20 games (10 starts), Morgan has averaged 12.1 points, 5.7 rebounds and 2.9 assists in 25.9 minutes per contest.
Look for undersized centers Grant Williams and Daniel Theis to be called upon when it comes to the lack of frontcourt depth for now.
Joel Pavón
Follow @Joe1_CSP