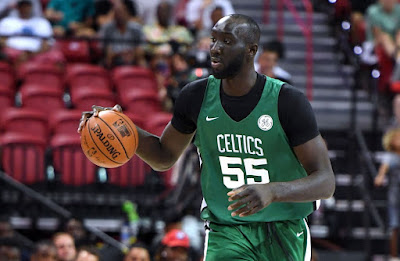 Tacko Fall has had an interesting few weeks, recently signing an Exhibit 10 contract with the Celtics, while becoming a standout at the NBA Summer League stint in Las Vegas earlier this month.

Life seems good for Fall, who is back home in Senegal for the first time in seven years, as part of the NBA group of former and current players that were invited to participate in the 17th edition of Basketball Without Borders Africa; a program that trains the top teenage basketball players from all over the continent.

It was here where Fall got a chance to meet and train with one of the NBA's best big man in Philadelphia 76ers' Joel Embiid.


"We worked on pretty much a lot of work on the post, and every now and then he would stop and try to show me some things and try to tell me about the game in the NBA," said Fall to Boston Globe's Adam Himmelsbach. "So I thought that was pretty cool, especially coming from him one of the best, if not the best center in the NBA right now."

Fall plans to play for Senegal in next month's FIBA World Cup and will be fighting for a spot on the Celtics' 15-man roster come training camp in October and while Embiid provided great insight, Fall also met NBA legend and eight-time All-Star Dikembe Mutumbo for the first time and said the Hall-of-Fame center was "like an uncle and I'm like his nephew."


"He gives me advice, and he talked to me a lot about life in the NBA, especially as a player from Africa, like how you need to behave and carry yourself throughout the NBA. And he told me things about diet and workouts."

It's not everyday you get to meet two of your idols, as Fall got to work out with a current superstar, while also getting advice about life and basketball from an African icon. If Fall can put to use all he's learned this week from both Embiid and Mutumbo within the next two months, Celtics fans might get their wish of finally seeing Fall on Brad Stevens' 2019-20 roster.