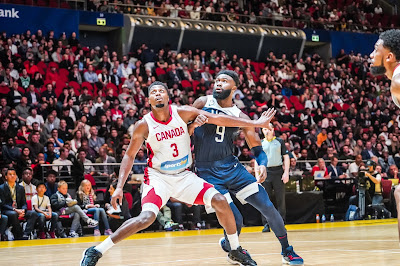 On Monday Team USA took their talent to Sydney, Australia where they bounced back to beat Canada 84-68 at the Qudos Bank Arena, in the final exhibition game ahead of the FIBA World Cup.

Celtics guard Jaylen Brown led Team USA with 19 points on 8-of-11 shooting to go along with 4 rebounds as a reserve. Team captain Kemba Walker was back in the starting lineup, as he finished with 12 points and 5 rebounds, while Jayson Tatum got his first start and continued to struggle on offense by hitting 2-of-11 from the field for only 5 points and 4 rebounds in just over 19 minutes of action.


"The sky is the limit for this group." 🇺🇸


Marcus Smart didn't score on his one shot attempt, but did grab 4 rebounds, 3 steals and made an assist in 17 minutes off the bench.

Donovan Mitchell also scored 12 points and Myles Turner notched a double-double of 10 points and 15 rebounds to help Team USA wrap-up their training camp on a high note following a 98-94 loss to Australia on Saturday.

Canada was held scoreless in the first three minutes of the opening quarter and Team USA never gave up a lead as they went on a 11-1 run to finish the half and take a 46-31 advantage at the break.

While Team USA didn't shoot great overall from the floor at 43 percent, Canada shot worse, hitting only 32 percent of their shot attempts. In the second half Team USA barely outscored Canada 38-37, after their 15-point halftime lead.

Team USA will travel to Shanghai, China to resume practice on August 28. Their first World Cup game will be on Sept. 1 against Czech Republic, followed by Turkey on Sept. 3 and Japan on Sept. 5.