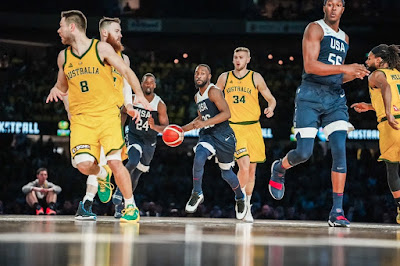 Australia got their revenge on Saturday morning after beating Team USA 98-94 in front of their home crowd of over 52,000 at Melbourne's Marvel Stadium.

While Team USA continues to experiment with different lineups with the FIBA World Cup being around the corner, Australia took full advantage after suffering a 102-86 home loss Thursday.

Marcus Smart got the starting nod in his first exhibition game since nursing a left calf injury for most of training camp. The Celtics guard was named one of three Team USA captains and finished with 7 points on 2-on-3 field goals made and 3 assists in just over nine minutes of action.

Fellow Team USA captain and Celtics teammate Kemba Walker led the way with 22 points and 4 rebounds off the bench, while Jaylen Brown went a perfect 3-of-3 from the floor for 8 points and Jayson Tatum, who struggled with his offense a bit, chipped in 5 points on 2-of-8 shooting.


"The loss means that we need to play better," Gregg Popovich said. "It's a measure of who you are. Nobody wins forever. This is a group of guys that's worked very hard, like I said, to get to know each other and get to know a system. And whatever comes, we can handle. Our job is to try to get better every day. We learned some things tonight. We're actually a better team now than at the start of the game, because of the knowledge from the game. So, now we move on."

Harrison Barnes had 20 points and 6 assists, while Donovan Mitchell was the only other to notch double-figures in scoring for Team USA with 12 points in the loss.

It was another back and forth in the first half, as Team USA only led 49-48 at intermission and pushed the advantage to 68-58 in the third quarter before Australia made their run.


"The Aussies gave us a great lesson as far as where we have to be and how we have to play in this kind of competition," Popovich said. "So, we'll get used to that and hopefully learn."

Team USA has officially finalized their 12-man roster ahead of a final tune-up game against Canada in Sydney on August 26. Kyle Kuzma, who did not play against Australia and will not participate going forward in any upcoming competition due to an ankle injury.


The 32-team FIBA Basketball World Cup tournament will tip-off on in China August 31 and run through September 15, while Team USA will face Czech Republic (Sept 1), Turkey (Sept 3) and Japan (Sept 5) as part of Group E.