Celtics fortunate they didn't 'roll the dice on DeMarcus Cousins' 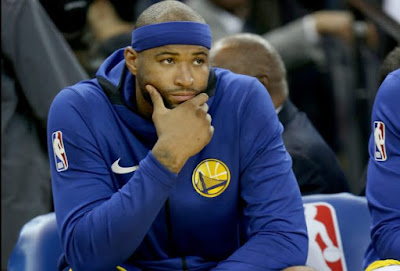 It was in the spring of 2015 that I heard the Boston Globe's Bob Ryan emphatically state he would personally pick up DeMarcus Cousins at the airport if Danny Ainge worked a trade for him. Cousins was with the Sacramento Kings at the time, and Ryan was among many others that wanted the star center in Boston.

That never happened, but the Los Angeles Lakers did take the bait and signed Boogie to a one-year deal this summer, a contract reportedly worth slightly more than the veteran minimum. ESPN's Adrian Wojnarowski subsequently reported on August 15, that Cousins had suffered a third injury to his left leg - this time a torn ACL.


Now things continue to get tougher for the four-time All-Star, as an arrest warrant has been issued for Cousins on a charge of domestic violence, per USA Today's A. S. Perez


"A warrant has been issued for the arrest of Los Angeles Lakers center DeMarcus Cousins on a misdemeanor domestic violence charge.

Mobile police spokesperson Charlette M. Solis told USA TODAY Sports on Thursday that "an arrest warrant has been issued." The third-degree harassing communications charge was listed on the Mobile municipal court website, although no other information was provided."

Cousins' talent has never been seriously challenged. He is a highly-skilled big man, albeit one with a history of on-court misbehavior - mostly in the form of technical fouls. It is not surprising that Bob Ryan wanted him in green.


"I will personally pick him up at the airport," said Ryan. "I do not think he's evil. I think he's growing up better and he is enormously talented, enormously so. That is a cornerstone player and he's still very young. The year he was in the draft there were people who thought he should've been the number one pick just on the talent. He's proving to be a premier big man. Yes, I would roll the dice on DeMarcus Cousins." [NBCSportsBoston.com]

Celtics fans should be glad Cousins never showed up in Boston. The three serious injuries to the same leg could prove career-ending for Boogie. And the allegations that generated the warrant for his arrest may mean his misbehavior does not only take place on the hardwood. With his history, it is doubtful that Celtics coach Brad Stevens could have harnessed such a volatile talent.