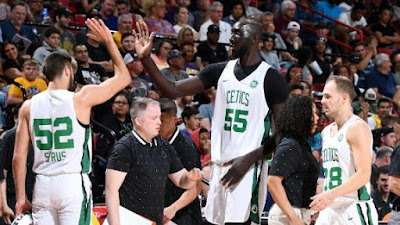 Fall's potential to possibly making the C's roster became a reality after a great showing of length, shot-blocking and scoring during Las Vegas Summer League. It's been an interesting couple of months since the 2019 NBA Draft for the already Boston fan favorite.

Since signing an Exhibit-10 contract in July with the Celtics, Fall has already met and worked out with the likes of Joel Embiid and even Hall-of-Fame centers Dikembe Mutumbo and Kareem Abdul Jabbar. Though Fall could also end up with the Maine Red Claws of the G-League if he were to get cut, due to the Celtics already having used both their two two-way players slots and signing 15 players to fully or partially guaranteed deals currently on their roster.

If it were not to work out with the Celtics, Fall could be claimed off of waivers by another team based on the contract he signed last month, which is considered a minimum one-year rookie deal. Fall's agent, Justin Haynes believes a team would still give him a look if the Celtics wanted to go in another direction without his client.


"If the Celtics release him, I don't think he goes unclaimed," said Haynes to Adam Himmelsbach of The Boston Globe. "I think somebody will take a shot on him because he's done enough to show he can find a place in the NBA. I'm really hopeful that it's Boston. I hope they find a way, and they do have a vision for him."

Celtics coaches and players have been really high on Fall since he was brought in by Danny Ainge, who was on record saying Fall's development was a "high priority" during the team's introductory press conference of Kemba Walker and Enes Kanter.

While Fall continues to show real promise, his growth and ability to play the game at the highest level will be put to the test. If 23-year old Fall passes with flying colors, the Celtics will find a way to retain his services one way or another.