Brad Stevens on last season: 'We've moved on past it a long time ago' 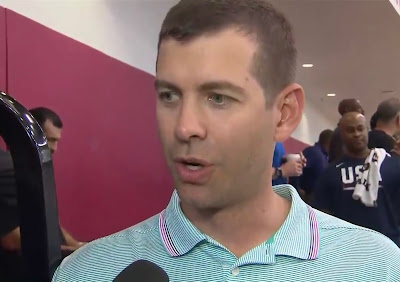 While the Celtics players that were invited to Team USA's training camp have been asked about the disappointment of a season that was the 2018-19 campaign, one thing is clear, they are ready to move on.

Brad Stevens was visiting Team USA's practice on Wednesday and was also questioned about what went wrong this past year, as the Celtics coach has already turned the page on last season.


"It's funny because I think, on the outside, because there’s not much to talk about for two months in the summer, that's kind of been the consistent story," Stevens told NBC Sports Boston on Wednesday. "On the inside, we moved on past it a long time ago. It’s been a great vibe in our building. We have a great group of workers.

"Jaylen [Brown] and Jayson [Tatum] are here but they were in Boston last week working all the way up until this point. Obviously, we've had a ton of our young guys through. We turned that page a long time ago. That's what you should do after a season. I think, whether you had success or it wasn’t as good as you want, you learn from it and move on."

Marcus Smart and Jayson Tatum spoke about the departure of Kyrie Irving last week just prior to the start of training camp for Team USA.


"It's over with. I’m focused on next year," said Smart. "I want to focus on the guys that are going to be around."

Jaylen Brown agreed with Smart calling the last season's Celtics roster "dysfunctional,", but also noted that the team so far this summer has a different vibe with all the changes already made.


"It can only be positive," said Brown. "Last year, I can't see it being any worse than that. Coming out and being positive is everybody's mindset."

"Experience is the best teacher, for sure. Every year I've gained and gotten more experience. This year I look at it as a new canvas, we're artists, and it's time to paint," added Brown.

Still, no current Celtics player is sold that only one thing was to blame for last season's shortcomings, especially when it comes to Kyrie Irving. Even Kemba Walker is eager to prove that last year's ending is not an indication of what his new team is capable of.


"That's what life is about, not even just basketball. Like, you're going to have ups and downs," said Walker. "It's probably good for those guys to have that down. You can’t always be on the high. To them, last season and their struggles and things like that, I think that’s motivation for them coming into this season.

"I think they're ready. I think they're ready to work, which they've been doing. And just ready to take their games to whole 'nutha level, especially because of last season. That's how it was for me, coming in and things weren't so great in my early years in the league but it motivated me to get better. Hopefully, they got that same feeling."

Stevens, just like the rest of the Celtics are already gearing up for the 2019-20 season, but with so much work to do before the start of training camp in September, there is a consistent reminder of what to expect, especially around this time of year.


"There's 30 teams with great hope and anticipation," said Stevens. "It's called the offseason."

So while the offseason rolls on and questions of 'what happened?' continue to be asked, the general consensus will remain the same for the Celtics moving forward.


"Every year is a fresh start, a chance to start over," said Smart. "Go out there and redeem ourselves."