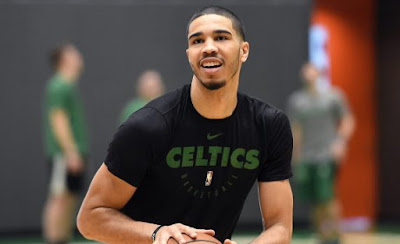 It's been quite the offseason so far for Celtics forward Jayson Tatum, as the 21-year old prepares for his third year in the NBA.

In early June, Tatum's summer began with an invite to Team USA Basketball's training camp roster, where he'll get an opportunity to not only play on an international stage at the FIBA World Cup (August 31-September 15), but may also do so with a few of his Celtics teammates (Kemba Walker, Jaylen Brown and Marcus Smart were invited).

Just a few weeks later, a deal was announced for Tatum to officially join the Jordan Brand, along with other athletes.


But that's not all Tatum has been up to over the last couple of months, according to Tatum's skills coach Drew Hanlen, the young Celtics veteran has been putting in some work this summer and he seems as "locked in" as ever to prove his naysayers wrong.


"I mean, he shot 40 percent over his first two years in the NBA," Hanlen said, to the Boston Globe’s Adam Himmelsbach. "I think people overcriticize him. If he would have shot 37 percent his rookie season, everyone would have freaked out, and now he shot 37 and people look at is as a drop-off. But I think there was just some frustration with him not being in the role he thought he would be in after the previous season."

After a disappointing 2018-19 campaign for the Celtics, where Tatum's minutes and touches were limited due to the return of Kyrie Irving and Gordon Hayward, this upcoming season will be an important one for the young forward.

With the arrival of new All-Star point guard teammate Kemba Walker to replace Irving, Tatum is poised to have a breakout year, as he will become more of a focal point in Brad Stevens' offense.

So, what has Tatum been focused on during his recent workouts that will help take his game to the next level?


"Driving and getting downhill through contact and being able to finish around the rim is our No. 1 focus," Hanlen said. "And then consistency when he's shooting off the dribble or off a full-speed move from the 3-point line. Those are our two things, just getting to the rim and drawing fouls, and finishing when you do get to the rim, and then consistency with threes. We just want him to be more efficient, and we think he will be. He's as locked in as I've ever seen him. He's very, very locked in."

While Tatum statistically just came off a better season than his rookie year, his shooting percentage, especially from behind the arc (37.3 percent, compared to 43 percent in year one) dropped, but that didn't stop teams from inquiring about his services in trade talks.


Opposing executive on Tatum: "We tried to get him. The price they asked was insane, as it should be. He's going to be an All-Star. If his numbers were down, it's only because no 19-year-old had been at that level before. Kemba (Walker) is a great addition and (Gordon) Hayward is going to be better, but Tatum is the franchise in Boston." [CelticsBlog]

It's no secret that Ainge refused to include Tatum in any potential trade with the New Orleans Pelicans for Anthony Davis. Clearly, the Celtics brass have all the faith in what they believe is a rising star in Tatum.

With the Celtics roster being revamped for the upcoming season, Tatum will not only be a centerpiece, but if he's indeed "locked in" and Boston surpasses expectations, Ainge will once again look like a genius.

Either way, there's no more excuses for the horse the Celtics have bet all their money on when it comes to Tatum, especially if you believe him on what kind of third year he envisions to have.


"I'm going to average over 20. All-Star. And the Celtics are going to the championship," Tatum told Ballislife.com.

For Ainge's sake, we shall see.