Why Brad Stevens should implement small ball in 2019-20 season 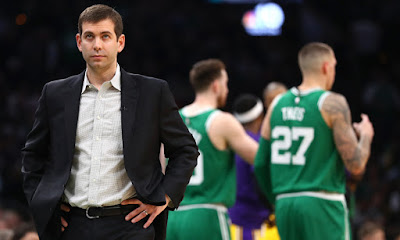 For those not around at the time, Warriors coach Don Nelson invented small-ball in the NBA.

In the mid-2000s, Golden State employed the offensive strategy with much success. Known as the 'Death Lineup' or 'Nellie Ball,' Nelson loaded his lineups with guards and small forwards -- a pattern Celtics head coach Brad Stevens would do well to lighten up his rather-predictable substitution patterns and follow suit at opportune times this coming season.

Critics of Nellie Ball claim it won't win championships, and they're probably correct, however, it can throw a big wrench into an opposing team's defense when it's used sporadically. The concept lies in having either a conventional center, or a small-ball five, that is an outside scoring threat who can draw out the opposing center away from the hoop to allow the four smaller guys to attack the rim.

Nelson was a five-time NBA champion as a player with the Celtics but never won a title as a head coach, still, he was a three-time NBA Coach of the Year recipient and is considered one of the top 10 best coaches in NBA history.

How does this idea translate to coach Stevens and the Celtics' upcoming season? Let's break it down.

The three true bigs for the Celtics are Enes Kanter, Vincent Poirier and Robert Williams, none of which are accomplished shooters from beyond the arc and no, Green Giant, Tacko Fall can't be included in this yet. But if the Green Giant food chain doesn't hop on the promotion opportunities here (assuming Tacko thrives down the road), they would be missing out.

The center position for small-ball could end up being Daniel Theis, Jayson Tatum or rookie Grant Williams. The remaining foursome would most likely include Kemba Walker, Marcus Smart, Jayson Tatum, Jaylen Brown or Gordon Hayward.

This would give guys like Walker, Tatum, Brown and Hayward an advantage. All three can finish strong at the rim and would excel on the offensive end of the floor.

One other idea would be an altered version of positionless basketball. Nelson leaned heavily on offense to win games but putting a shot-blocker in, surrounded by a small-to-midsize foursome, would work on occasion.

The main point here is for Stevens to lighten up a bit on his strategies. The Death Lineup certainly worked perfectly for Steve Kerr and the Warriors -- a model the Celtics can look at as an example -- but without elite shooting Stevens will have to slightly change his approach.

After the frustration of last season, nobody needs more of a break than Stevens. No one is expecting miracles this time around, so it may be time for Brad to relax and experiment a bit without the worry of bad press.