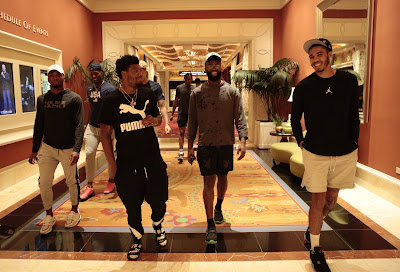 The four Celtics players who will compete for 12 spots on Team USA's roster, that'll head to the FIBA World Cup in China arrived for training camp in Las Vegas Sunday with the rest of those invited.

Workouts have begun for Marcus Smart, Jaylen Brown, Jayson Tatum and Kemba Walker, who were dubbed as Team Shamrock by Smart last week.


"Excited to be here, ready to compete," Brown said in a video tweeted by USA Basketball "Got my guys here. We've got four Celtics here. Let's see what we're gonna do. It should be fun."

"First day out in Vegas. Training camp, back with USA Team. I’m excited. It should be a lot of fun," Tatum added.

The four Celtics hopefuls have their Team USA numbers picked out and C's fans will recognize two numbers in particular that are already hanging in the TD Garden rafters.


Tatum picked No. 34, who we all know NBA champion Paul Pierce wore for 15-years of his Hall-of-Fame career in Boston, while Jaylen Brown choose the iconic No. 33, which was worn by none other than Larry "Legend" Bird, who won three championships and NBA MVP’s during his 13 years as a Celtic.

Walker, and Raptors' Kyle Lowry could be a lock as Team USA's starting backcourt for coach Gregg Popovich. However, Tatum, Brown and Smart will likely battle it out with Donovan Mitchell of the Jazz, Harrison Barnes of the Kings and Khris Middleton of the Bucks for starting wing spots.

The tournament is set to begin in China on August 31 and will run through September 15.