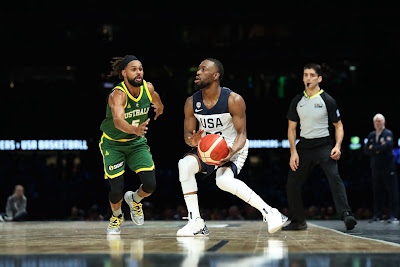 Walker led all scorers with 23 points and 6 rebounds, while Jaylen Brown added 11 points on 5-of-9 shooting to also grab 6 boards as a starter. Jayson Tatum finished with 11 points, 4 assists off the bench for Gregg Popovich, as he spoke on the home crowd that came out to support.


"It was an incredible atmosphere," said Tatum, "unique experience."

Marcus Smart, who has been out for most of training camp with a sore left calf, did not play due to a coach's decision.

It was a tight first half, as Team USA led at intermission 44-43, before the Celtics trio got onto the court together in the third quarter to blow the game wide open, despite the tough defense of former C's big man Aron Baynes (8 points, 6 rebounds).


"It was a physical game, the competitiveness was great on both ends," said Popovich. "I thought the Boomers run some hellacious offense, really hard to guard, they do a great job moving and cutting. Coach (Andrej) Lemanis has got them at a high level in that regard."

It was announced shortly following the exhibition that Walker, Smart and Mitchell would be named Team USA captains for the upcoming FIBA World Cup in China.


"We have a bunch of guys who don't mind being the underdogs," Walker said afterwards. "We are hungry, and we are going to go out there to try and win a gold medal...I take pride in being a leader and guys looking to me and I'm here to set the tempo and bring my experience and energy."

Team USA will face Australia for a second time as part of their training camp tune up on Saturday afternoon.