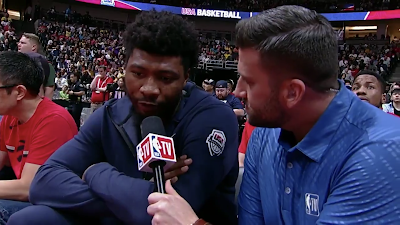 Gregg Popovich will need to cut just one more player from his current Team USA roster, and many analysts feel that Marcus Smart will be a casualty because of his calf injury.

It appears that both Smart and Pop don't share that common thought. After Friday night's 90-81 victory over second-ranked Spain, 13 players (one over the 12-man limit) remain on the roster, and all of them made Saturday's trip to Australia.

NBA TV's Jared Greenberg interviewed Smart while he was on Team USA's bench watching his teammates beat Spain in Anaheim and "The Cobra" says he has no intention of going home. Smart was asked about his calf issue and conditioning while he continues to rehab.


"Every test they've put me through have been exceptional," Smart said of Team USA's training staff. "I'm ready to get back out there."

The outlook certainly looks good, at least from Smart's viewpoint. If the tests on his lower left leg are truly revealing a minor issue that will be eliminated by rest and treatment, Popovich's stance would most likely be to keep the current 13-man roster intact for the next two weeks until the Celtics guard's total recovery is hopefully complete.

Smart was asked why he didn't take the "easy" way out and just go home to get ready for training camp in Boston.


Greenberg: "It would be easy for you to say I've got to get ready for the NBA season and go home. What has made you stay with this team?"

Smart: "That isn't my makeup. I made a commitment to stay with these guys. I'm in it for the long run."

All indications by Smart are that he is "100-percent confident" that he will be totally recovered from his injury and play with the final Team USA's 12-man crew in China's FIBA World Cup. It seems that coach Popovich has the same view and will keep Smart around unless his left calf soreness persists.

The USA National Basketball Men's Team is scheduled to continue training in Melbourne, Australia and will resume camp on August 19.

Following this past Thursday's practice, PJ Tucker withdrew from the team due to an ankle injury he sustained and according to Yahoo Sports’ Chris Haynes, De'Aron Fox is the latest to withdraw from the team's training camp roster as of early Saturday, to focus on the upcoming season with the Kings.

Kemba Walker and Jayson Tatum look to be locks to make the final roster, while Jaylen Brown's solid 9 points and 4 boards in less than 10 minute-performance in the team's win over Spain, could retain his slot.

Meanwhile, Smart seems like he's ready to play at any moment. Hopefully, that isn't simply his hard-nosed stoicism on display.