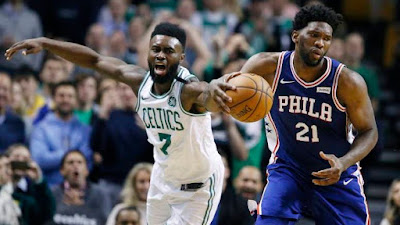 The 2019-20 NBA regular season schedule has officially been released and the Celtics will play 10 out of their first 16 games away from the TD Garden.

The Kemba Walker era in Boston will tip-off Oct. 23 on the road in Philadelphia, when old friend Al Horford and the 76ers host the Celtics. The C's home opener will be two days later, as the 2018-19 champion Raptors come to town for the first time this year.

Marcus Morris, otherwise known as "Mook," will grace the TD Garden parquet as a visitor for the first time after playing two seasons in Boston, when the Celtics host the Knicks on Nov. 1.

Walker makes his first return to Charlotte since his sign and trade over the summer, to face is old team the Hornets on Nov. 7. The Celtics will head out west to face the Golden State Warriors in their new San Francisco arena on Nov. 15, as part of a season-high five-game road trip, which includes a stop in Los Angeles to take on the new-look Clippers (Nov. 20).

The Celtics return to the Garden on Thanksgiving Eve in what could be Kyrie Irving's first game in Boston since taking his talents to Brooklyn in game one of a home-and-home with the Nets (game two is on Nov 29).

Horford's possible first game in Boston as a Sixer is scheduled for Dec. 12, as Terry Rozier (outside of preseason) comes back to the Garden as a visitor on Dec. 22.

NBA on Christmas Day kicks-off with the Celtics heading north of the border to take on Toronto in the first of five league games on the docket Dec. 25. Aron Baynes (barring any trades) and the Suns come to Boston on Jan 18.

LeBron James, Anthony Davis and the Lakers make their only appearance in Boston on Martin Luther King Day (Jan. 20). The Warriors come to town on Jan. 30, before the Celtics head to Houston on Feb. 11.

Coming out of the All-Star break, the Celtics have a four-game western swing, highlighted by the Lakers at Staples Center on Feb 23. Boston will welcome Russell Westbrook, James Harden and the Rockets on Feb. 25.

The Celtics are on national TV 25 times this season and will have 12 sets of back-to-backs during the 2019-20 campaign.

Here's the rest of the schedule for the Celtics below 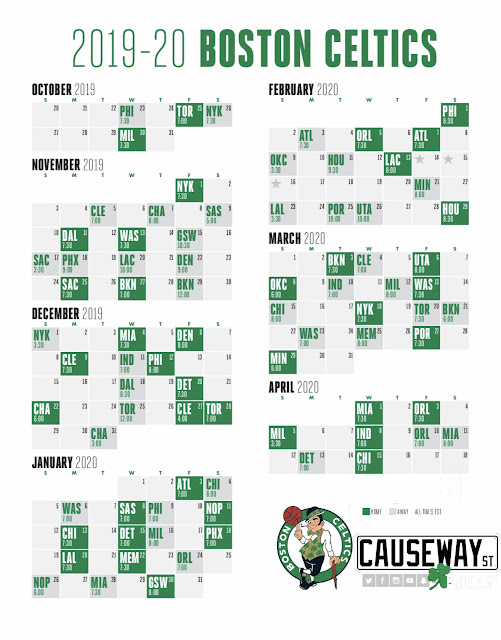