Kemba Walker: 'I’m not trying to go in and think that I have to be better than Kyrie last year' 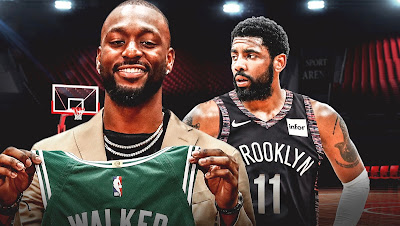 While the 2018-19 Celtics didn't reach expectations, Kemba Walker is more than aware of what lies ahead this upcoming season.

Walker spoke to Shams Charania of The Athletic in a recent interview about not necessarily just being Kyrie Irving's replacement during the 2019-20 campaign.


"I'm not trying to go in and think that I have to be better than Kyrie last year," Walker said. "It happens. Great players go to teams all the time and it just doesn't work. It just didn't work for him. Kyrie is one of the best players we have in this world. It was just unfortunate, an unfortunate season."

The Celtics were lacking chemistry last season but not talent and despite the disappointing finish, Walker is eager to join and believes the team can succeed going forward.


"These guys, they've been winning for years," Walker told Charania. "I want to be part of that. This is a big-time roster. The guys that make up the roster, there's such great young talent — guys who are hungry, who want to win and want to get better and work hard. That's who I want to be around."

Playing for a deep playoff contender was very appealing to Walker, who chose to sign with the Celtics this offseason, after never getting out of the first round in Charlotte over the past eight years.


"I haven't wrapped my mind around contending at this high level," Walker said.

It's clear Walker is saying all the right things so far, but it remains to be seen if the 29-year old All-Star guard can erase all of last season's ugliness that is still so fresh in the mind's of those who followed the Celtics so closely over the past 12 months.