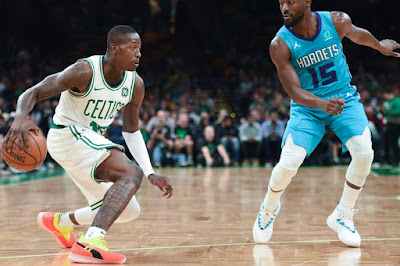 The 2019-20 Celtics will look very different after the departures of Kyrie Irving, Al Horford, Marcus Morris and Terry Rozier during the offseason.

Rozier will be the first of the veteran bunch to make his return to the TD Garden as early as October, when the Celtics host the Hornets in one of their two home games this upcoming preseason.

Chris Forsberg of NBC Sports Boston, reported that Rozier and newly signed guard Kemba Walker could play against each and their former teams for the first time on October 6.


Terry Rozier returns to TD Garden on Oct. 6 for a preseason game vs. the Celtics.


Both Walker and Rozier were acquired by their respective teams via a sign and trade last month.

Rozier, who signed a $58 million deal for three years with the Hornets, played four seasons in Boston and led the Celtics to the Eastern Conference Finals last year, filling in for the injured Irving. Though he had a reduced role during the 2018-19 campaign, where he averaged just nine points off the bench, Rozier showed he can be an NBA starting point guard when given the opportunity.

Walker signed a $141 million, four-year contract with the Celtics, after playing eight years in Charlotte, becoming the franchise's all-time leading scorer and a three-time All-Star.

Though just a preseason tune-up between these two teams, emotions could be running high for Rozier stepping on the Garden floor as a visitor and Walker playing against the only team he's ever known.

It was also reported on Friday that the Celtics will host their former superstar point guard Irving and the Brooklyn Nets for the first time this upcoming regular season on Thanksgiving Eve (November 27).