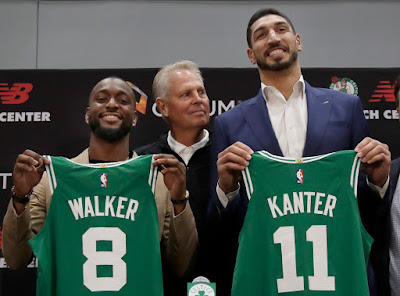 It didn't take long for Enes Kanter to make his decision to sign with the Celtics this summer.

In fact, all it took was a phone call from All-Star point guard Kemba Walker, according to the Celtics center. Making an appearance on FS1's First Things First, Kanter talked about a phone call he received from Danny Ainge's cell phone when NBA free agency opened its doors in late June.

Walker, who was on the other end of the call, recruited Kanter to come to Boston. The Celtics, at the time, was a team Kanter was already considering prior to the unexpected call, however, hearing from Walker himself made the decision a no-brainer.


"He was in my draft class, I watched him (for) years and years," Kanter said about new starting point guard. "I know how good of a leader he is, how good of a player his is on and off the court. So I'm like, 'I think it could be very special.' He definitely was one of the biggest reasons."

Kanter also listed a handful of other reasons why he's excited to be a part of the Celtics culture in Boston, including the diehard fans and Mark and Donnie Wahlberg.


Reasons why @EnesKanter chose the @celtics:


He also talked about playing against the Celtics last season, when he picked up on a particular vibe from last year's Celtics team -- a sense that the team wasn't in sync with one another with Kyrie Irving as its leader.


"Kyrie's definitely one of the best point guards. When I was with Portland and we played the Celtics, I could feel the chemistry wasn't there. Ther was like a negative energy."

Kanter added he's looking forward to joining forces with Walker and that he would prefer him as his point guard over Irving.

"Kyrie's definitely one of the best point guards. When I was with Portland & we played the Celtics [in Boston] I could feel the chemistry wasn't there. There was like a negative energy. ... Kemba is a really good leader. I'll definitely pick Kemba any day over Kyrie."—@EnesKanter pic.twitter.com/W9oVky5KmV
— First Things First (@FTFonFS1) August 28, 2019