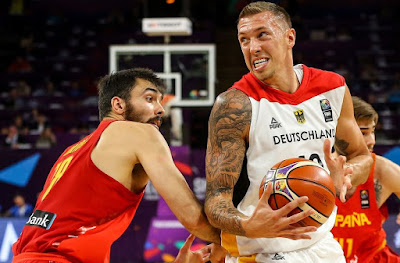 What stood out from his performance was the fact that Theis' four blocks came at the rim and from the perimeter. He is moving fluidly, and any trace of his torn meniscus injury from over a year ago, seems to be completely gone.

It also looks like the 6-foot-8 German has added a floater to his offensive arsenal, as Theis got off two successful beauties over the opposition. His passing seemed solid, and the eight boards speak for themselves. Put all of this together with his post game and outside shooting, and we are looking at some serious versatility here.

Earlier in the week, I stressed the fact that the 5-spot could be a major concern for the  Celtics this upcoming season, and with continued improvement over the course of the season, Theis could land a starting gig at center.

The other three possibilities to cover the 5-spot are Robert Williams III, Vincent Poirier and Enes Kanter and while they are all either seven-footers or close to it, none of them have Daniel's ability to do so much. We have no idea what Poirier is capable of at the NBA level, yet. Kanter can be a double-double machine, but he's not a reliable shooter from any distance and despite his height, he is not a shot blocker. Williams on the other hand is solid at rejecting shots - is one hell of an athlete - but he is still too raw.

Kanter may begin the season in the starting lineup, but Theis has a good shot at ending up there because of his diverse skill set, which he's been displaying so far during FIBA World Cup exhibitions. If Theis can maintain that level of play against better competition with the Celtics this season, he may surprise us all.

Check out Theis' highlights below against Tunisia: