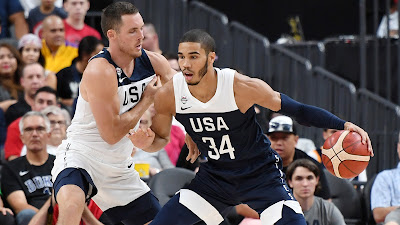 Team USA's training camp wrapped up in Las Vegas on Friday night with a Blue vs White intrasquad scrimmage at T-Mobile Arena, where the USA Basketball Men's National Team beat the Select Team 97-78.

Jayson Tatum spins and scoops with the left! 😮🔥#USABMNT #USAGotGame


Tatum showed signs of his offseason workouts with Drew Hanlen starting to payoff, as he was aggressively taking the ball to the hoop in transition and not just settling for mid-range jumpers. The Celtics forward thought that consistency on defense is something that the team can improve on before the final 12-man roster is selected.


"One thing I know we can work on is not fouling so much," Tatum said. "We fouled a little bit too much tonight. The more time we spend with each other the better we'll get."

Walker played his typical game, using his shifty dribble to get by his defender, while getting his shot off whenever he wanted to. The Celtics guard says he felt good about the win and where the team is heading.


"I think I played pretty well," Walker said. "Thought the team did a great job of helping me get open. As far as a team I think we got better. From day one of practice to the second day to the third day we got better. We are trying our best to teach each other as much as possible as fast as possible. I think we are on a great pace right now."

“I’m having an amazing summer.”@KristenLedlow caught up with @KembaWalker ahead of tonight's scrimmage to talk his #USABMNT experience and his crazy offseason! pic.twitter.com/FN7Fi18XX8
— NBA TV (@NBATV) August 10, 2019


Jaylen Brown chipped in two points and two steals in 11 minutes of action, where he started alongside Walker in the backcourt. Marcus Smart sat out with a sore left calf and plans on returning to the training camp next week where workouts will resume in Los Angeles on August 13.

As Team USA continues to prepare a final 12-man squad to compete in China's FIBA World Cup at the end of the month, it was announced that Thaddeus Young and Bam Adebayo were cut from the senior team and replaced with Derrick White and Marvin Bagley III.

Team USA has another friendly game scheduled against one of their rivals Spain next Friday.