Kemba Walker on Team USA: 'This is like a once-in-a-lifetime opportunity for a lot of us' 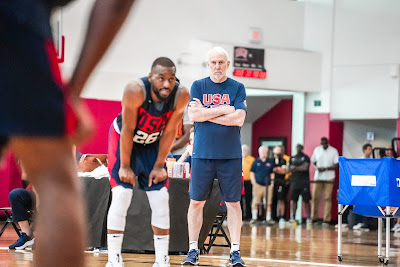 While many NBA superstars decided to skip the opportunity to represent their country during Team USA’s training camp, guard Kemba Walker and his three Celtics teammates were honored to step up in their absence.

Walker spoke to the media Monday following Day 1 of training camp at the UNLV campus in Las Vegas.


"I love basketball. I love to play. And what better opportunity to do that than to play for your country?" Walker said. "This is like a once-in-a-lifetime opportunity for a lot of us. I think a lot of us are happy those guys pulled out. This is our chance, this is our chance to get on the big stage and showcase our talents. It's a chance for us to do something new, to be a new-look team."

Despite this year's Team USA lacking "star power" compared to rosters of the past, it's created a chance for some of the league's younger talent to showcase their skills on an international level.


"We have a lot of guys that nobody probably even talks about, even knows," said Marcus Smart. "We're able to get our faces shown. … USA Basketball, to me, that's something that's really important."

The Celtics have four players vying for spots on the 12-man final roster that will head to China for the FIBA World Cup later this month. Smart said he hopes those selected will also get the opportunity to represent the team at the 2020 Olympics.


"We're playing for something greater than ourselves," said Smart. "We're going against [other countries] that have been playing together for years, and they've already built that camaraderie. We're taking a group of guys that have probably never even played with one another and … [learning to] act like a team, become a team. It's not easy. But we know we can do it."

Walker also appreciates those that have dropped out, as he gets to build some chemistry with a few of his new Celtics teammates before the start of the 2019-20 season.


"This is USA Basketball, this is a huge achievement," said Walker. "It's a huge honor to be a part of this."