Terry Rozier on Kyrie Irving: 'A lot of people don't know how great of a person he is' 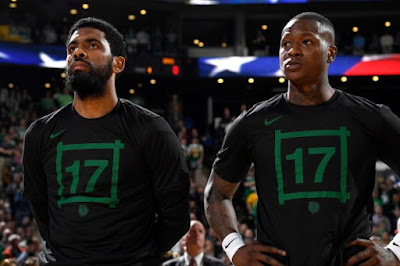 Many reports suggested that Kyrie Irving was already on his way out of Boston in the coming weeks prior to the start of NBA free agency, while this lead most to believe that the next logical step for the Celtics would be to re-sign unrestricted free agent Terry Rozier, who always wanted a starting job.

Despite a disappointing end to the 2018-19 season for the Celtics, it was time for a change and it's no secret that Rozier didn't keep quiet about his feelings regarding a possible future in Boston or elsewhere.

Rozier was not happy with his role of being Irving's backup again, after leading the Celtics to a successful playoff run in the spring of 2018 that ended with a Game 7 loss to the Cavaliers at TD Garden. The player otherwise known as "Scary Terry" averaged 16.5 points on over 40 percent shooting from the field, to go along with 5.7 assists and 5.3 rebounds during that postseason.

But with the return of a healthy Irving at the start of the 2018-19 campaign, coach Brad Stevens thought he could still manage to give both point guards enough minutes and touches even though it was clear Rozier wanted a promotion, but instead he became Irving's insurance plan.

The end result for the Celtics was both Irving and Rozier not being happy at all throughout the entire season, with rumors floating around that they disliked each other.

Rozier, who put up not so scary averages of 9 points (37 percent shooting), 3.9 assist and 2.9 rebounds, while playing 22 minutes in 79 games (only 14 starts) this past season, says his issues stem more from the Celtics organization rather than Irving.

According to Rozier, he and Irving have good relationship in spite of what has been reported over the coarse of last season. Rozier revealed that the two spoke just days leading up to their pending free agencies.

You can now also add Rozier to the Kyrie fan-club, along with Marcus Smart, Jayson Tatum, Wyc Grousbeck and Danny Ainge, who have all had positive things to say recently about Irving even after the way things ended this past May.

Irving is now in Brooklyn after signing a four-year max deal to team up with Kevin Durant and Rozier is in Charlotte after a sign a trade that brought Kemba Walker to Boston.

After a lackluster season for Rozier, he still managed to land a three-year, $58 million contract and he finally got his wish of running a team as the starting point guard.

While both Rozier and Irving couldn't get it done in Boston, they'll respectively have to deal with the pressure and expectations of being leaders of two separate young rosters.

Both of them should have plenty of motivation, especially after the season they just had.