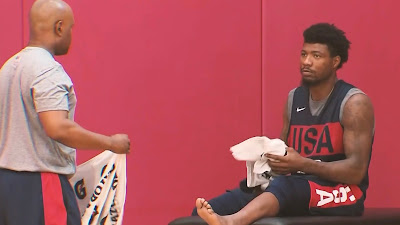 Celtics guard Marcus Smart did not practice on Tuesday with Team USA after removing himself from morning workouts in Las Vegas due to a sore left ankle.

Smart says he made the decision to sit out strictly as a cautious choice to rest and not make the pain any worse.


"Just kinda taking a precautionary option right now," said Smart. "It's only Day 2 so you don't want to push anything and do anything stupid."

According to Smart, he didn't injure himself, but he did feel some soreness, as he was found on the trainer's table with ice wrapped around his left ankle when the media was finally allowed to enter during practice.


"Gotta be smart … My availability is important so taking it easy on Day 2, as an athlete as you grow and mature, you learn to [be careful]," said Smart.

When asked if he'd returned for Wednesday's workout, Smart sounded optimistic about being available.


"I will be out there," said Smart. "Like I said, just a little sore today. Go get the treatment on it, precautionary reasons. We got a great training staff here and they're going to do a good job of making sure they get me back out there."

Smart is one of four Celtics players competing for a spot on Team USA's 12-man roster that will head to the FIBA World Cup in China at the end of the month. He has stressed how much it's an honor to be invited to training camp and to get an opportunity to represent your country.


"We're playing for something greater than ourselves," said Smart.